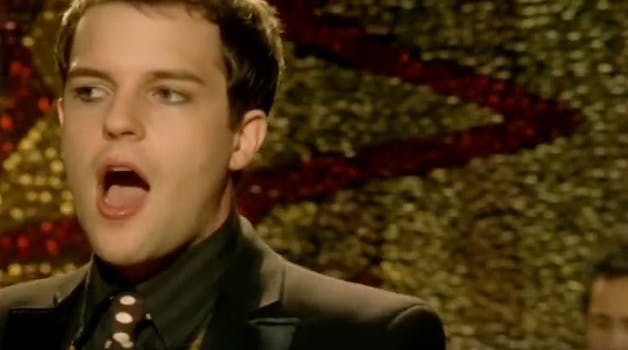 Screengrab via The Killers VEVO/YouTube

You listen to ‘Mr. Brightside’ once and look what happens

This meme is doing just fine.

It’s happened to all of us at one time or another. It’s a modern rite of passage. You listen to the frustratingly catchy 2004 Killers single “Mr. Brightside” just once, and all of a sudden you’re coming out of your cage!

The “listens to Mr. Brightside once” meme started Tuesday with this insanely popular tweet from a relatively unknown college student, Josh Woosley:

The dog, you see, is coming out of his cage (and is, by all appearances, doing just fine). This is a really good tweet starring a good dog, but even so, its spread is remarkable. Even after his joke has gone viral, Woosley only has about 1,250 followers on Twitter; the Mr. Brightside joke now has more than 100,000 likes and 50,000 retweets.

Its reach is greater than that, even, because it’s been stolen by several other accounts—jealousy, turning tweets into your timeline.

The joke has also inspired others to do their own variations. It started out with a dog in a kennel. How did it end up like this?

*listens to mr brightside once* pic.twitter.com/MDEYSkRoUA

Open up your eager eyes: The new meme is Mr. Brightside.