Finding ‘Linda Glocke,’ the woman who vowed to destroy ISIS

Her Internet comment went viral in January, but what do we really know about 'Linda Glocke'?

In January, someone claiming to be “Linda Glocke” left a fateful Disqus comment on an ABC7.com story about the jihadist group ISIS threatening to kill two Japanese hostages. “I will destroy ISIS,” she promised.

The oath drew immediate praise from other commenters and quickly circulated the Web. The sheer incongruity of this seemingly pleasant, Midwestern-looking woman going ham on a bunch of terrorists made it instantly meme-able. Today there are multiple parody Twitter and Facebook accounts that continue to riff on Glocke’s patriotic bloodlust. She’s even been called the “perfect counterpart” to notorious troll “Ken M” and has inspired a SoundCloud track or two.

@HeyItsLindaC I see you have been busy fighting the terrorists pic.twitter.com/hVS8eNCXsc

Look out ISIS @HeyItsLindaC is coming for you better hide yo kids hide yo wives pic.twitter.com/jKGpvES4ti

But just who is Linda Glocke? The answer isn’t so simple. For starters, there are two Linda Glocke accounts on Disqus. The user who goes by “linda_glocke” seems more plausible as an average, genuine Internet commenter: clearly religious, a little judgmental, and sometimes sarcastic.

Then there’s “linda_glocke_1,” which seems to be—judging by the screen name and the hyperbole of the comments—nothing more than a troll account that pushes the “original” Linda Glocke’s persona into the realm of ideological absurdity. This, of course, is the user who posted the now-infamous “I will destroy ISIS” remark, and they are happy to sardonically engage anyone else foolish enough to take their words at face value.

It seems obvious, then, that linda_glocke_1 is just poking around for a reaction with “her” comments, the ISIS vow being their viral masterpiece. We’re left to wonder, though, if linda_glocke is a genuine commenter, or whether anyone by that name exists. This Linda Glocke on Facebook is not a physical match. LinkedIn’s Linda Glocke, based in Omaha, doesn’t have a profile picture. Whitepages gives us two Linda Glockes (the one in Nebraska and another in Wisconsin), but both are over 60, which again seems to contradict the photo avatar attached to both Disqus accounts.

So let’s take a closer look at that photo. This Twitter parody account carries a slightly expanded version of it—you can see the woman is standing in a group. Plug that into a reverse image search and you find what appears to be the source image; it came from a long-dormant blog about “teaching cardio to the 2nd batch of first year medical students at the Patan Academy of Health Sciences in Nepal,” written by Carol-Ann Courneya, currently an associate professor in the University of British Columbia’s Department of Cellular & Physiological Sciences. 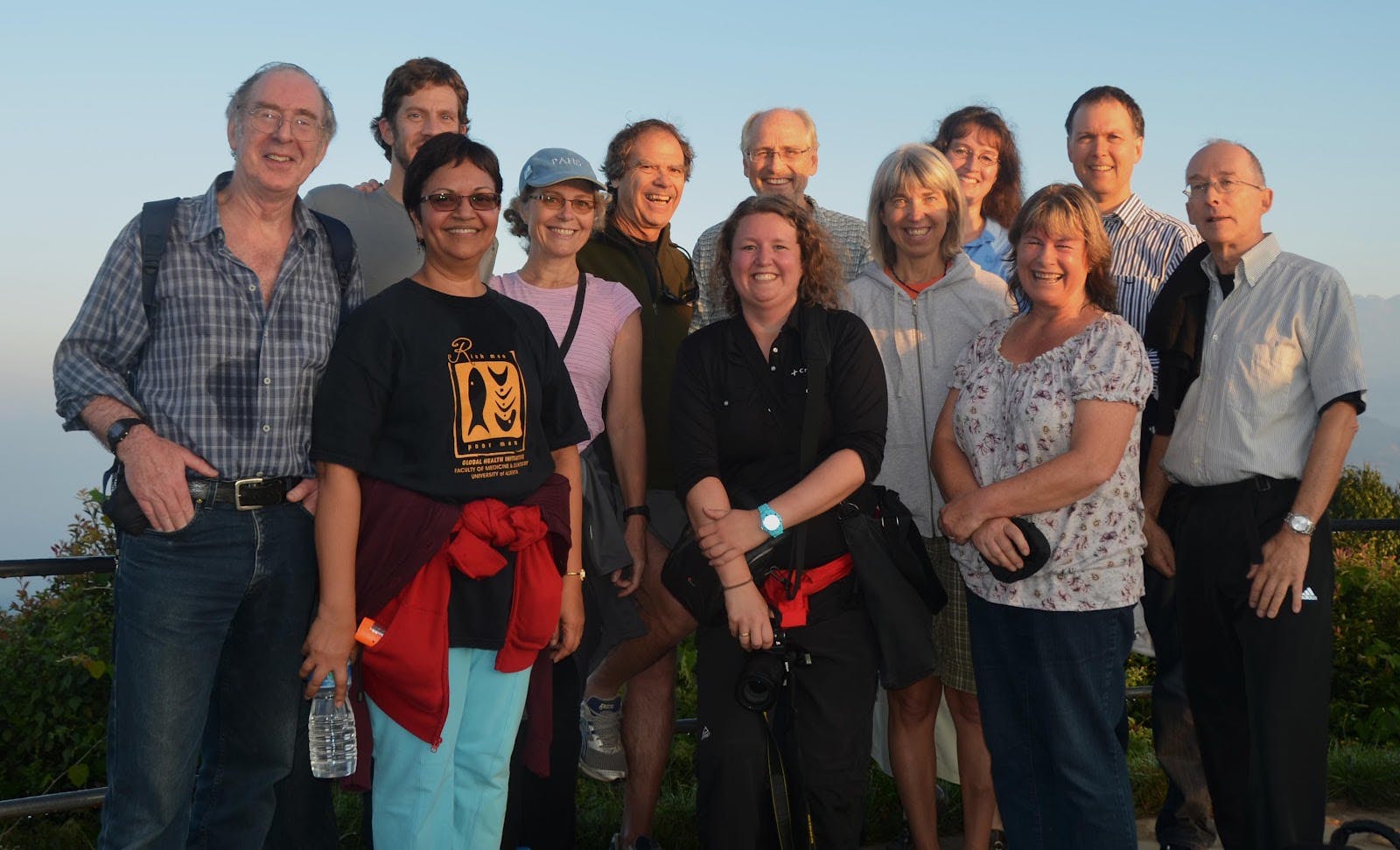 The people in the photo above, according to Courneya’s blog, are some “early morning trekkers” among “members of the International Advisory Board here to attend the 8th Annual [Patan Academy of Health Sciences] Consultative Meeting” who made it up a mountain to watch the sun rise over the Langtang Range. The Daily Dot reached out to Professor Courneya by phone and email to confirm the identity of the woman whose face has come to be associated with the name Linda Glocke.

Sadly, she could not. “I do not know the person in question,” Courneya told the Daily Dot in an email. “It was a group shot at a popular viewpoint.”

And so, for now, the trail runs cold. We could find no connection, either, between any Linda Glocke and the Patan Academy of Health Sciences, and if we had, it would be a stretch to link her and the Linda Glocke in Omaha, who specializes in public relations. Did a real Linda Glocke simply co-opt someone else’s appearance for the linda_glocke account? Or did someone separately borrow the image and name? And what relation is the linda_glocke_1 troll? We may never know.

What would be most incredible (and is perhaps most likely) in all this confusion is that there’s a woman walking around right now who has no clue she’s the face of 2015’s most enduring, relatable, mysterious meme. Whoever you are, ma’am—Linda Glocke or not—we salute you.