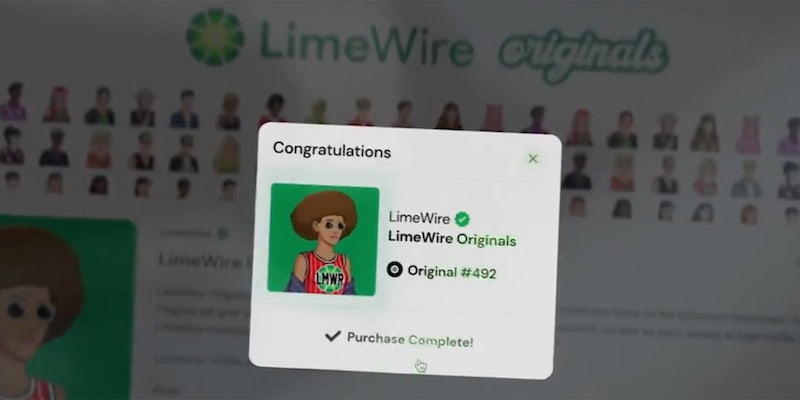 ‘LimeWire literally murdered my computer back in the day’: Everyone is dunking on LimeWire’s NFT relaunch

LimeWire was famous for piracy and viruses. Is that really a smart branding choice for an NFT site?

Pop culture is currently dominated by elder-millennial nostalgia, but did anyone really ask for a LimeWire comeback? Regardless, the vintage file-sharing brand recently relaunched… as an NFT platform.

This unexpected LimeWire reboot was announced in March, but it’s attracting attention now after a cringey commercial began to spread on Twitter. Capitalizing on those millennial nostalgia vibes, the ad shows two kids using LimeWire in the early 2000s (with a LimeWire-appropriate Soulja Boy soundtrack), then growing up to buy NFTs from the new LimeWire.

If you believe that any publicity is good publicity, then this commercial is a hit. But people are mainly sharing it to dunk on the idea of a LimeWire comeback—partly thanks to the widespread backlash against NFTs, and partly because LimeWire was notoriously riddled with viruses and mislabeled files.

LimeWire just isn’t a reassuring brand for high-stakes financial transactions! Especially since its main claim to fame is piracy. The original service was shut down in 2010 following a copyright lawsuit. So, as many people are pointing out, the new LimeWire is trying to leverage nostalgia for a platform that is mostly associated with theft and viruses.

The new LimeWire is reportedly a collaboration between two Austrian entrepreneurs and a group of celebrities, including Blink-182 drummer Travis Barker and singer Brandy, selling music-themed NFTs. It’s also totally unaffiliated with the original LimeWire, whose founder says the NFT rebranding “falsely uses that brand that we created for purposes for which it was never intended.”

So the NFT platform is essentially just using LimeWire’s brand and URL for name recognition—which appears to be a successful strategy, although not for the most flattering reasons.