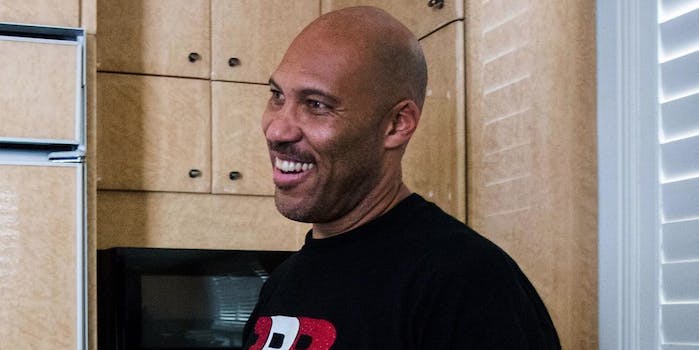 People are oblivious to the difference between the men.

Oblivious to the difference between the two men, President Donald Trump supporters began attacking Burton—the actor best known for hosting the PBS show Reading Rainbow—with Ball, the basketball dad who has an ongoing beef with Trump.

The confusion seems to stem from Ball and Burton having similar first names, plus last names that begin with the letter “B,” and the fact they are both Black. While Ball caused controversy with a CNN interview on Monday night, Burton has been unwillingly dragged into the Twitter fire and sent rude messages.

Some tweets have since been deleted, but they live on in screenshots.

@levarburton You're a has been actor with a thief for a son and Trump is the president of the United States. Get the picture?

One of many sleights I am having to endure these days. Thanks! @Lavarbigballer… #bydhttmwfi https://t.co/uYkoDOV6yZ

But none of that is true huh?… lol

At least one person tried to clarify the misunderstanding.

You got the wrong person dummy. @levarburton is the reading rainbow and star trek guy, @Levarball is the basketball guy who you trumpers are pissed at. And your profile says educated. HA!

The drama started when Trump called Ball “ungrateful” because the controversial basketball dad didn’t thank Trump for getting his son, LiAngelo Ball, out of going to jail in China. The UCLA guard and two other teammates were caught shoplifting sunglasses from luxury stores.

Shoplifting is a very big deal in China, as it should be (5-10 years in jail), but not to father LaVar. Should have gotten his son out during my next trip to China instead. China told them why they were released. Very ungrateful!

On Monday, Ball went on CNN and still refused to thank Trump.

“Why is that on your mind?” Ball said. “All this stuff that’s going on and that’s on your mind—that a father didn’t say thank you?”

Ball said that he would handle his son and that Trump should stay in his lane. The internet has conflicting takes on the whole ordeal.

With all due respect to the stupidity of those like Maxine Waters, Nancy Pelosi & Marshawn Lynch, I truly believe LAVAR BALL is the DUMBEST person on the 🌎!

Can you imagine ANYONE acting THIS STUPID when @POTUS gets their son released from a Chinese jail?!? pic.twitter.com/6aPW11VuE3

If Obama saved my son from Chinese prison for stealing shoes, I would be thanking him after I beat my son for STEALING! I don’t care if he’s 6’ either! This Lavar Ball is a joke and poor example of a dad. No wonder his son steals.

As for Burton, he might want to avoid Twitter for a while. Or take his Star Trek: The Next Generation cast member’s advice.

If you cared about our President, you’d change your name.