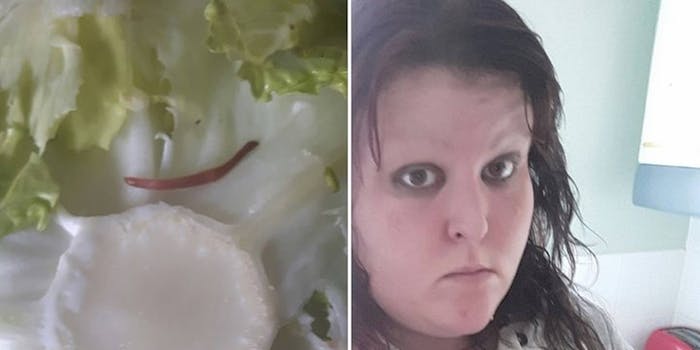 She named it 'Jackie Chan.'

The life of a social media manager for a major #brand must be a bleak one, having to face constant complaints and trolls with corporate-mandated politeness and grace. But sometimes, a bright spot appears and the #social #media #guy has a chance to shine.

Such a stroke of luck recently befell Ross, a Facebook account manager for British grocery chain Sainsbury’s. A woman named Leila Daly posted an insane, dramatic, yet good-humored complaint about a worm in her lettuce, setting Ross up for a beautiful response.

Here’s her original grievance about the worm, accusing Sainsbury’s of making her fat and single and demanding that the company shut down entirely:

Dear Sainsbury’s, it is with a sad heart that I write to inform you that your lettuce made me fat.

Today, starving, I entered my kitchen to make my lunch. Upon opening this fine lettuce, I noticed someone had already began eating it. Who, may you ask? Well it was this little worm.

As you can imagine I was absolutely horrified. My children started crying, my cats started headbutting the wall in shock, I soiled myself, my husband divorced me, it was complete madness.

I sat on the floor crying for a little over an hour. Until, puffy and red, I gave in and ate a burger. This was solely because I could not eat the lettuce purchased from you. Due to that burger, I instantly gained 12 stone. This is through no fault of my own and entirely due to the wormy lettuce.

What kind of establishment allows worms on food that comes from the ground? Do you want me to die? What if I get worms and they eat my insides and then my children will be without a mother? You should be ashamed of yourselves! Due to my failure as a person I have now become a fat prostitute. Again, this is solely your fault.
I have enclosed a picture of the offending item along with what my dinner should have looked like if not for the offending worm.

Hang your heads in shame. Fire all your staff. Close down your business. There is no other way.

Well, that certainly seems reasonable, given the circumstances. Let’s see how Ross handles this one.

Hi Leila, what a terrible situation. That poor worm, munching away on some lettuce, all content with his life. Now he’s playing the starring role in a horror story. I hope you’ve been able to calm the children, selling them the clear benefits of the situation. I mean, worms are easy pets to keep, I assume? Although, a 12 stone weight gain from a burger, that’s quite the achievement. Not at all your standard burger, it sounds amazing. Was it one of ours, as I’d like to try it? Judging by your picture, you make a mean salad, perhaps salads could be an alternative option to your new career move? Of course, it’s clear we should hang our heads, and worms certainly don’t belong in lettuce, but as an alternative to closing down and issuing P45s, how about we sort a refund, with maybe a little extra to help feed your new friend and treat yourself to something nice on us? Drop us a PM, we can discuss. Ross

Damn. Flawless. He took the ridiculous premise of her original post and ran with it, while also covering his customer service bases because, let’s face it, that did look like a real worm.

But Leila wasn’t satisfied, not yet. She had a lot of demands for her new worm, Jackie Chan, who was turning out to be quite a handful.

I am willing to consider a transfer to salad maker rather than a career as a fat prostitute. Good idea Ross. I will definitely mull this over.
As for the imminent closure proceedings, I am willing to let you keep your stores if you buy me a Ferrari and a fresh lettuce. If we make a deal I’ll call off my lawyers.
In terms of my little wormy friend (Jackie Chan), you will be most pleased to hear that he was very much alive when he appeared in my house. We have sent him to live in the garden, however, he has been terrorising the neighbours dog so we are actively seeking a worm foster home. Any pointers would be necessary.
Further to the above, we must discuss arrangements for worm care. I feel like whilst you sent your pet to live with me you should contribute towards the household bills. He’s an avid Netflix fan, and has requested we run a TV and electricity into the playhouse in the garden which he refers to as “King Jackie’s Kingdom of doom”. Perhaps that’s something you could assist with until we locate a foster home.
The burger was indeed bought from your store, it was a rustlers quarter pounder and I’m just thankful that Jackie didn’t get hold of it or we would be having some incredible worm problems right now. Superworm, perhaps?
I look forward to your response.
Leila.

A Ferrari, Netflix, and worm housing? A tall order, but Ross was on it—at least part of it.

A fresh lettuce, I could organise. Well, points or a gift card for you to buy one at least. Hopefully Mr Miyagi won’t be hitching a ride on that one. The Ferrari might be a little tricker. How about a packet of Taste the Difference cookies instead, they’re the Ferrari of their field after all? Not sure Jackie’s looking for a foster home. Word on the ground is that he’s found a wormfriend, ideal for Netflix and chill, so I don’t think he’s up for a move. I’m sure the neighbour’s dog will get used to his new friend. Maybe have a chat with Jackie – does he need a guard dog for his Kingdom of Doom? Ah, yes, Rustlers. I’m familiar with their burgers. A good choice. I wouldn’t be up for sharing my Rustlers with a human, never mind Jackie the worm. Maybe the ‘little extra’ I mentioned could buy you another one, although another 12 stone might be too much of a risk. Ross

Now Ross was speaking Leila’s language. She agreed to send him her address via Facebook PM and “settle this out of court.” By this point, Ross was becoming what the British call “an absolute legend.” Tens of thousands of people were following the exchange between Sainsbury’s and the woman with the lettuce worm.

With the eyes of his country upon him, Ross delivered. And then some.

As if this could get any better, I just arrived home to post addressed to Jackie Chan and post addressed to me.
Ross, you are an absolute legend, not for the free stuff, for the humour. Much love. Absolutely amazing.
(Please tag friends who commented in the replies to further share his awesomeness 😂)
Have attached a picture but in case it’s not clear I’ll write what they say below.
Letter 1 (included was a Netflix gift card and a laminated picture of Ross the worm)
“Dear Jackie,
Long time no squirm. How’s life underground? Good, I hope.
Leila from your adopted family let us know you’d hitched a ride on a lettuce and we’re holidaying in her house. Not cool, man. Not cool.
I hear you’ve also taken to Netflix. Who wouldn’t, it’s so good. It’s an expense though and, with free food and board, you might want to pass the contents of this letter on to Leila. Although, having said that, after that burger, she may not want to be spending more time on the sofa…
Anyway, enjoy your new home. My best to Mrs Chan.
Ross.
P.S Leave the dog alone”.
Letter 2
“Dear Leila.
Thanks so much for contacting us on Facebook.
As I mentioned, I’ve enclosed a gift card for you to use the next time you shop with us. Please allow 72 hours after receiving this, to ensure that the balance has been activated.
I hope Jackie’s not causing too much trouble, and that’s the neighbour’s dog is no longer being terrorised.
I’ve requested £10 be added to the gift card. I hope this allows you to buy a lettuce free from ninja worms, and maybe some of those cookies I suggested. <coughs> maybe a Rustlers too?
Thanks for letting us know what happened. My best to Jackie, your husband and the kids. Oh, and the neighbour’s dog too.
Kind regards,
Ross”

Brilliant. And here’s the photo: 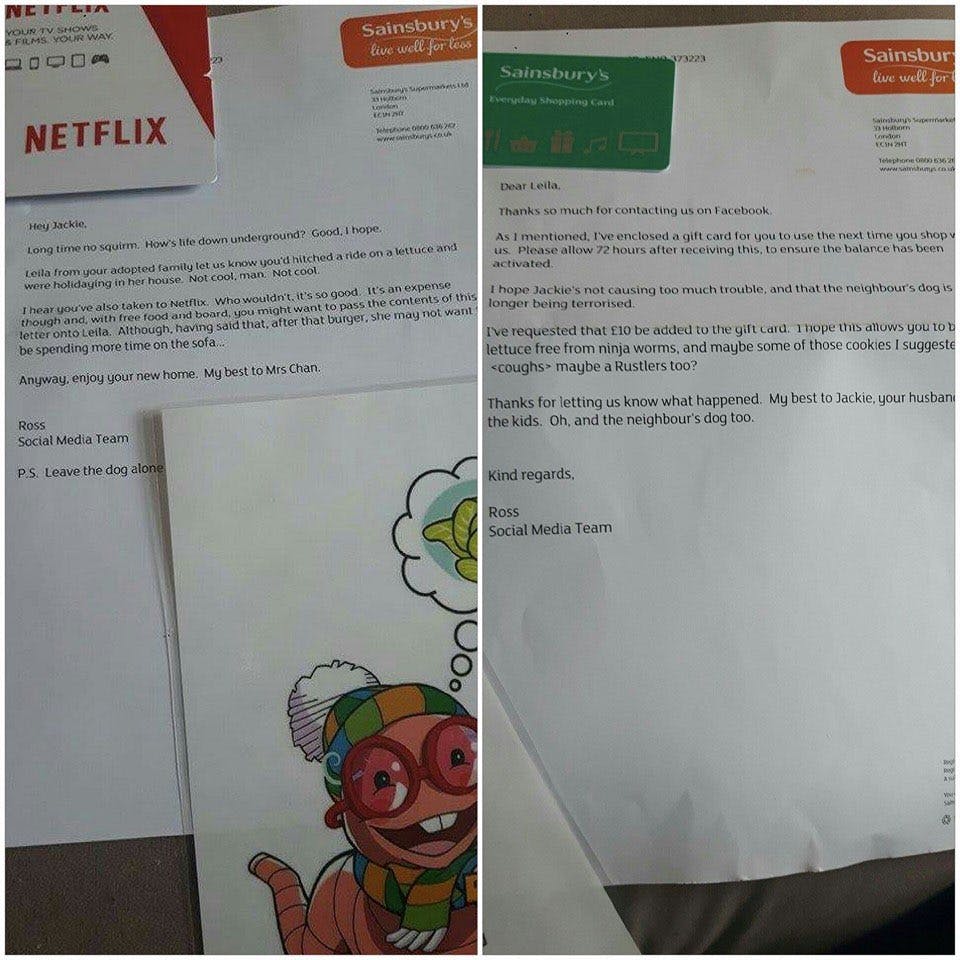 It’s not that often that the employees behind #brands get to be human on Facebook, let alone actually funny. This is a non-cynical online interaction between two people, transcending our prevailing corporate culture, and it was all prompted by a little worm in the lettuce.  Nice work, Jackie Chan.