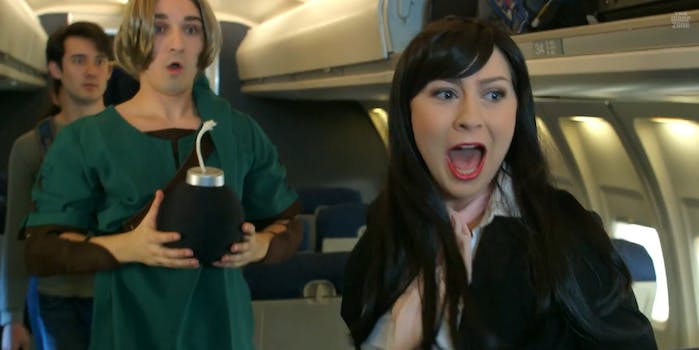 Why can't he just get around on Epona?

The fantasy realm of Hyrule from The Legend of Zelda had all sorts of magical wonder: powerful wizards, mysterious potions, angry chickens, you name it. One marvel that it seemed to lack, however, was sufficient air transportation. In fact, given that he is used to traveling around in whistle-inspired funnel clouds or aboard flying horses, Link probably has no idea how to handle modern day commercial air travel.

So when our green-capped hero boards a plane with one of his trusty bombs in his bag, he naturally causes alarm in everyone from the stewardess to his fellow passengers to even the stereotypical hostage negotiator on the ground.

The comedic geniuses behind the YouTube channel The Warp Zone (responsible for videos like Drinking Games for Gamers) are back with an all-new adventure that will drive four swords into your funny bone.

Screengrab via The Warp Zone/YouTube