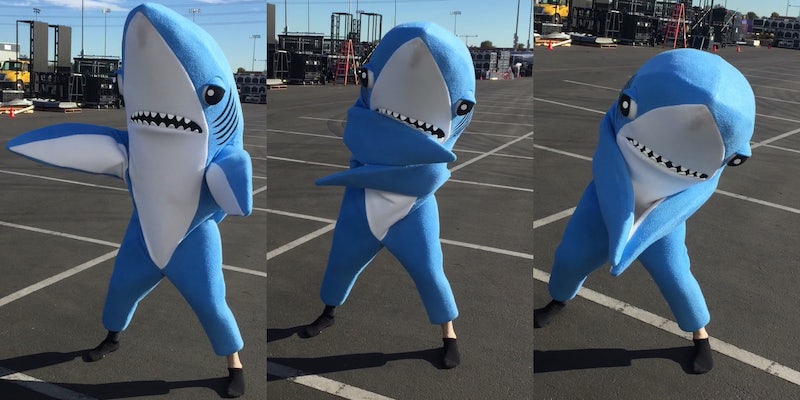 An early glimpse at what would soon become an Internet sensation.

Before the Super Bowl halftime show was won by the two sharks who danced behind Katy Perry, those sharks were just two ordinary fish preparing to make a splash.

The Internet has been obsessed with the sharks—and Bryan Gaw and Scott Myrick, who have since outed themselves as the Left Shark and Right Shark respectively—ever since their debut. Gaw and Myrick even put the resume item on their social media accounts. Their popularity stems in part from Left Shark’s comical inability to get his moves down.

While Myrick’s Right Shark could move to the beat (and has the looks to boot), Gaw’s Left Shark was one of us. He might not have gotten everything right on the world’s biggest stage, but he pushed through it anyway.

He wasn’t perfect, but he tried. And as you can see in this video, apparently taken before the show started, Gaw had practiced. Music or not, he was rocking those fins.

It’s not often we get to see sharks in the wild like this.

In the end, everyone involved was proud of what they accomplished. Even Perry gave credit where credit was due.