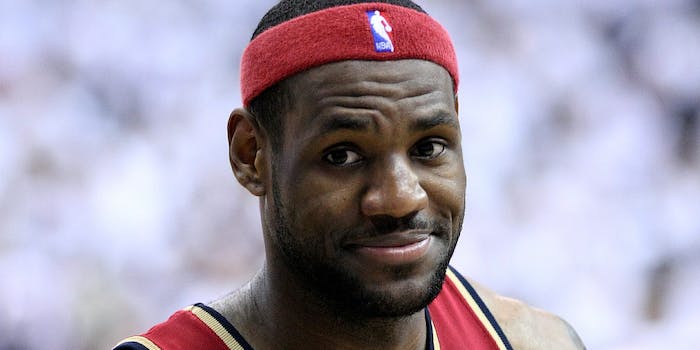 The funniest LeBron James memes from the Decision 3.0

LeBron James, widely considered to have carried the Cleveland Cavaliers through the playoffs, has signed a four-year, $154-million dollar deal with the Los Angeles Lakers, and everyone’s reaction seems to be “Yeah, we get it.”

LeBron is considered by many to be the greatest NBA player of all time, and his team was still swept in the first four games of the finals by the Golden State Warriors.

JR Smith taking the ball back out instead of going for the win in game one has come to represent the whole series in people’s minds. It might be a bit unfair to the Cavs, after all, you don’t get all the way to the NBA finals because of one player, even if that player is as talented as James, but it’s still fair to say that LeBron shouldered an enormous amount of the burden.

“The load that I have to carry offensively, it’s been what the season has asked for,” he said in a post-finals interview, available on NBA.com

All of which is to say that LeBron’s move to L.A. is seen as both unsurprising and well deserved. Naturally, Twitter celebrated it with memes galore.

JR: Man, why you leavin?

Now LA has a God and a King!
Zlatan welcomes @KingJames pic.twitter.com/4gYooOpURD

“Yo Lebron why you got purple on your jersey” pic.twitter.com/L9ZPMdcmP9

When Lebron walks in the Lakers locker room and sees Isaiah Thomas pic.twitter.com/Zn9siaWnEu

Beyonce, Lebron James is moving into the neighborhood. It’s your time. pic.twitter.com/86VJmRcAQT

Even Cavs fans seem to understand the move. For the most part they seemed grateful to James for leading the team to their 2016 Championship win.

Thank you LeBron. You will forever have given the city the happiest moment we’ll ever feel as Cleveland sports fans.

Although at least one fan had to remind James that when he came back to Cleveland he said: “I’m not going anywhere ever again.”

Remember that Friday night Bron had after he returned in 2014?

"That man is LeBron James and on Friday, 30,000+ Cleveland fans welcomed him back home and James proposed by saying “I’m not going anywhere ever again.”

Thanks for that PR move, @KingJames.

One can hardly blame James for making the move, though. Playing for the Lakers does give him a better shot at winning another NBA title, and the $154 million dollars probably doesn’t hurt either. Although it’s possible, as one fan suggested, that he just wants easier access to In-N-Out Burger.

“LeBron, why did you leave Cleveland?” pic.twitter.com/0M2DPdkndS