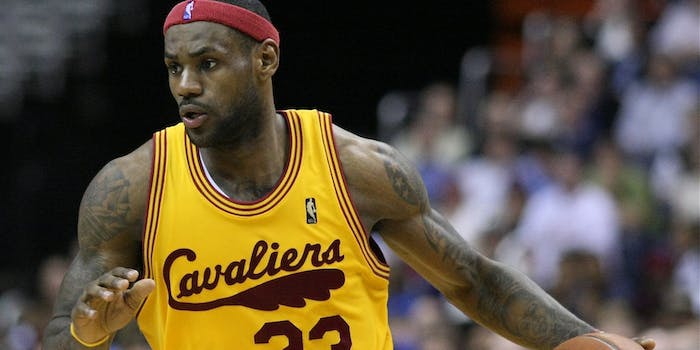 Add LeBron James to the list of concerned and outraged American citizens.

As athletes across the NBA, NFL, and even in Germany’s Bundesliga soccer league protest the lack of an indictment in the Eric Garner case, James joined in. The globally marketed hoops superstar revealed a T-shirt marked with “I can’t breathe” as his Cleveland Cavaliers took the court against the Brooklyn Nets Monday. The shirt was also worn by teammate Kyrie Irving, as well as several members of the Brooklyn Nets (former All-Stars Kevin Garnett and Deron Williams, role players Alan Anderson and Jarrett Jack).

It’s a powerful political move for the icon—not long ago, he was hesitant to sign a teammate’s anti-genocide-in-Darfur petition. Yet last year, it was the official James Instagram account that posted a united team response to the news of Trayvon Martin‘s death at the hands of George Zimmerman. He also honored Martin on the hardwood with his sneakers.

However another prominent Cavalier, Kevin Love, apparently opted out of the gesture. Love is white.

I wish @kevinlove was also wearing #ICantBreathe shirt in support. Or maybe one that says #MyTeammatesLivesMatter.

Update 7:31pm CT, Dec. 8: James says it was Jarrett Jack that reached out to him and convinced him to wear the T-shirt. “It’s not a Cavs thing it’s a worldly thing,” he told reporters pregame.

“As a society we have to do better… It’s more of a shout out to the family more than anything.”