The subtle Twitter link that ties LeBron James to the Cavs

LeBron James may very well return to one particularly salty, Comic Sans-loving hometown employer, if a new Twitter trend is any indication. 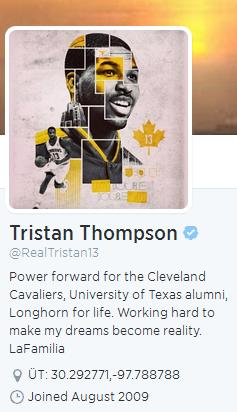 All three feature “La Familia” on their Twitter bios. Could this be some shadow coordination among an elite group of black market hoops mercenaries? That’s highly unlikely.

According to Complex, James has used “Amongst La Familia” in his bio since 2012, while Irving and Thompson have used the language since 2012 and 2013, respectively. That said, James did recently remove his Miami Heat affiliation.

It’s probably a post-Jay Z bit of lingering slang. Jay’s massively popular 2000 clique rap LP, The Dynasty: Roc La Familia was, simply, a swag-dispensing classic. There are an immeasurable number of “La Familia” inside jokes among hip-hop fans, and it’s a term that hasn’t budged from the rap lexicon in 14 years.

Lebron took out everything about Miami out of his bio and now him and kyrie both have “la familia” in their bios…. pic.twitter.com/kusmLOp54j

LeBron, Tristan Thompson & Kyrie Irving Have “LaFamilia” In Their Bio’s. That’s NO Coincidence