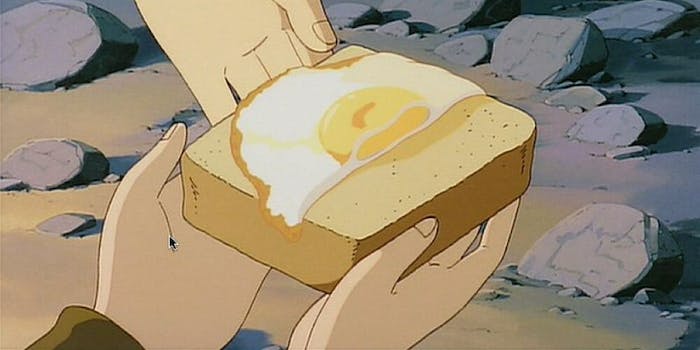 Japan is going bonkers for these anime eggs on toast

Everyone wants to eat it.

Every year, there’s a Japanese TV broadcast of the 1986 Studio Ghibli film Laputa: Castle in the Sky. And every year, thousands tune in and post on Twitter along with the film, setting world records for tweets per minute. The most-tweeted moment is typically the casting of the magic spell “balse,”  but another scene became a meme during this year’s broadcast. Does egg toast mean anything to you? It’s about to…

In the film, the orphan Pazu shares his egg-on-toast breakfast with Sheeta, a girl who floated down from the sky. It looks delicious. Way more delicious than it is in real life. Everyone loves it, so much so that the combination of the egg and bread emojis have become a meme:

In Japan, they call it “Laputa bread,” and dozens of people were talking about it (and eating it!) when the movie aired Friday night:

As popular as 🍳🍞 may have been, it came nowhere near the volume of the 2017 “balse”-a-thon. No one has yet released stats on how rapidly the magic spell was tweeted this year, but this short video indicates that the balses were coming fast and furious:

In 2013, “balse” set a record with 143,000 tweets per second. With Twitter’s growth in the country since then, it’s not far-fetched to believe that record is beatable.

It’s easy to think of Twitter as a garbage website whose sole purpose is to argue about Donald Trump, but that assumes Americans are only ones using it. And it ignores that, halfway around the world, it can be a website about eggs and toast and magic.