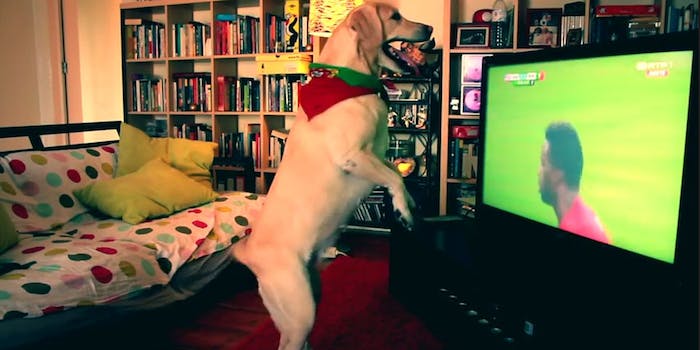 This Labrador is Portugal’s most adorable World Cup fan

OK, technically Labradors are capable of getting excited over almost anything, including slight breezes.

It seems that everyone is excited over the World Cup—even Labrador Retrievers.

OK, technically Labradors are capable of getting excited over almost anything, including slight breezes. And most probably couldn’t care less about the game of soccer—but neither did 75% of my Facebook News Feed, which certainly didn’t prevent them from becoming sudden diehard fanatics of the sport throughout the past few weeks.

The gods of timing were smiling on Severa the dog, whose reaction to Portugal’s goal against the United States during the World Cup matchup this past weekend was captured on YouTube.

Sure, there very well could have been a person just out of frame holding up a dog treat, but that doesn’t make Severa’s reaction any less endearing.

Screengrab via Severa, the dog/YouTube