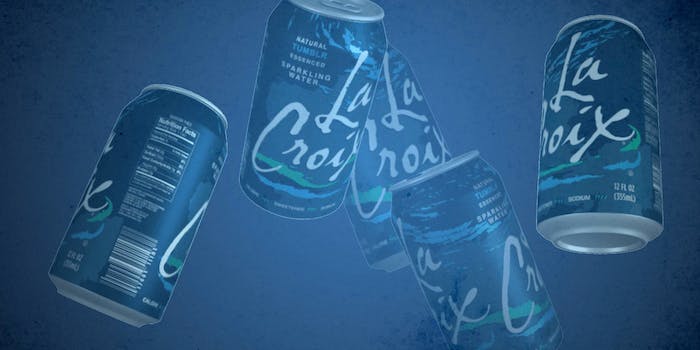 MyLaCroix.com lets you dream up whatever disgusting, bizarre La Croix flavor you want

Sparkling water brand La Croix has become very trendy this year, hydrating the hipster class of our great nation and occupying an entire wall in a Brooklyn Whole Foods. So it’s not surprising that fans are flocking to a new site that lets you design custom La Croix cans for any flavor you can think of.

The most popular designs on MyLaCroix.com are both surprising and illuminating. The list is a snapshot of all the memes and weird pop culture phenomena ruling the internet right now.

And by “the internet,” I mean Tumblr, because “Tumblr” is far and away the most popular entry.

The second-place entry (and again, it’s not close) is a yellow can called “summer with alberts puppy.” I confess that I have absolutely no idea what this means, and Google was little help. The only result was… MyLaCroix.com. If this is some underground meme that I’m not aware of, please explain it to me.

For a distant third, we have “Ribbonhead,” named after a Chicago hardcore band who posted this La Croix flavor to its Facebook page.

In fourth is Mountain Dew, a popular competitor to La Croix that differentiates itself with ingredients like sugar, caffeine, and flavor.

Fifth place is “THIS ALSO,” a design Tumblr that Photoshops its logo into everything. There’s that Tumblr influence again.

And here’s rosé, a reference to another popular La Croix competitor that differentiates itself through ingredients like pink color, alcohol, and flavor.

It’s followed by Whispering Angel, which Google tells me is a rosé brand. Makes sense.

The remaining entries can be divided into two main categories.

The first is memes, either dank or played out. This includes flavors like Stranger Things, Harambe (The Ape Who Died), KONY 2012, and half a dozen variations on White Tears, Male Tears, and MRA Tears.

The second, and most popular, is real things that would be disgusting to drink. Ham, Swedish Fish, Piss, Diarreha (sic), the 2016 election, and the Swedish herring surströmming all fall into this category.

In general, this is a very good experiment that both skewers the mysterious popularity of La Croix—it tastes fine, but doesn’t justify the near-religious hype—and gives us a look inside the Tumblr zeitgeist. Until 4chan finds it and turns it into Donald Trump, Pepe the Frog and Hitler, anyway.