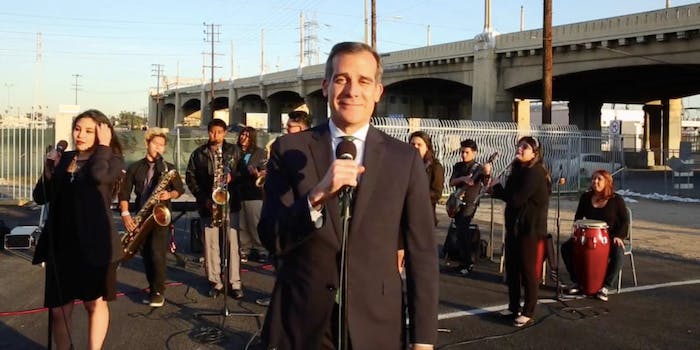 The only way to make the closure of a major Los Angeles freeway for almost two days palatable is with sweet jazz saxophone.

This weekend, L.A. is shutting down the 101, one of the most prominent highways that runs through downtown, to bring down the Sixth Street Bridge. Starting on Friday night, the 101 freeway east will take a 40 hour break “for R&R and R&B,” Mayor Eric Garcetti explained:

Garcetti knew exactly how to soften everyone’s hearts. Slow jams have a proven track record as a bad-news-delivery system; various newscasters and politicians have used the trick on late night appearances. It’s can even improve iconic theme songs—but this might be the first ever slow jam PSA.

With the help of the Roosevelt High School Jazz Band, Mayor Garcetti provided the details of the closure in a soothing and appealing way. While he’s shared it across many social media networks, it’s getting the most attention on Facebook, with 416,000 views and 7,116 shares.

“Stay safe out there, cats,” Garecetti crooned, after promising the freeway will be accessible before Super Bowl kickoff. He then thanked his backing band for making the announcement “slightly less awkward.”