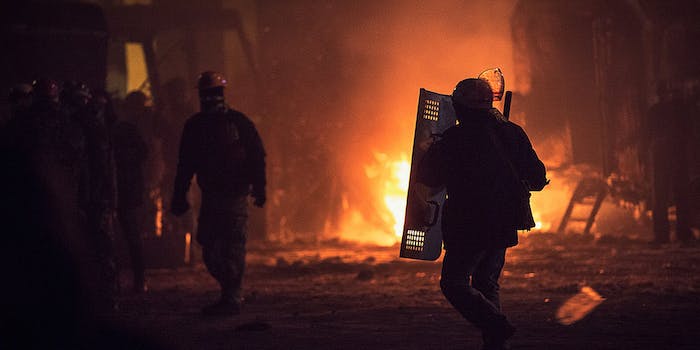 Everything you need to know about the Kiev riots: An Internet guide

How did these protests start, and what are they aiming to achieve?

Thanks to the Internet, there has been no shortage of information flowing out of Kiev this week, where thousands of anti-government demonstrators have violently clashed with authorities in an ongoing struggle for free speech.

But making sense of the deluge of media and messages can be difficult, especially when the lead-up to this week’s explosive riots has hardly been covered in western media. So here, briefly, is what you need to know about the situation in Kiev.

Why is this happening?

Throughout the week, many western media outlets have reported that the riots, in which hundreds of protesters and police have been injured, were sparked by President Viktor Yanukovich’s refusal to accept an economic pact with the European Union in favor of closer ties to Russia. This has led some to label the protest as pro-EU.

But Taras Ilkiv, a local Ukrainian journalist writing for Business Insider, this week, said the protests are in opposition to Yanukovich’s entire tenure in office, not just this one policy decision.

“The disruption of the association agreement with the European Union in November was only cause for local rallies,” Ilkiv wrote. “But after a peaceful student protest was violently dispersed by the ‘Berkut’ [special police] in Kyiv on Nov. 30, a million angry people took to the central square of the capital.”

Since then, the protests have morphed into a broad referendum on Yanukovich’s regime, demanding the resignations of the president, prime minister and interior minister.

Yanukovich was, by all accounts, Democratically elected in 2010, but Ilkiv said that since taking power, his administration has amassed a long record of corruption. Yanukovich’s administration is accused of censoring mainstream media outlets and using government tax agencies to harass the middle class. He’s also worked to consolidate government power structures under his command.

Why the sudden outbreak of violence?

After two months of protests in Kiev’s government district, Yanukovich and his allies passed legislation aimed at quashing the demonstrations. Last week, Yanukovich signed laws that would allow the government to shut down websites without due process and punish protesters with up to 15 years in prison.

This appears to have been the final straw. Rather than obeying the new laws, NBC reports that 100,000 protesters took to Kiev’s Independence Square on Sunday in sub-zero temperatures to openly confront law enforcement officers. The clashes have been marked by molotov cocktails, rubber bullets, tear gas, stun grenades and beatings. Hundreds have been injured, though an accurate count is hard to come by with reports that many protesters have refused medical treatment to avoid legal retribution for their participation in the protests. The government claims hundreds of riot police have also been injured during the clashes.

The deaths of at least two protesters have been confirmed, though opposition leaders claim as many as five fatalities. Protest are now starting to spread beyond Kiev, raising the spectre of a full-on civil war.

What’s the role of social media?

As the world has already seen through movements like Arab Spring and Occupy Wall Street, social media plays a critical, if not fully understood, role in modern protest movements.

Instead of waiting for period diplomatic cables and press reports, the rest of the world can literally watch the riots unfold live thanks to bloggers and activists like Alexander Aronets, who’ve been live streaming and uploading videos of the protests since they began in late November. Others have used Instagram to upload selfies from the riot zone as an act of defiance.

Online video sharing has also helped bring global condemnation down on Ukrainian secret police after a graphic video showed police forcing a protester to strip naked as officers tormented him.

But technology is a dual-edged sword. In addition to the fire hoses and tear gas, the government may be using GPS tracking technology to intimidate protesters with ominous text messages informing them that they are “registered as a participant in a mass disturbance.” Hundreds of identical messages have been sent out to protesters near the parliament building. The interior ministry has denied involvement, but one phone company claimed the texts were being sent through a “pirate” cell tower in the area.

In recent years, there’s been no shortage of laudatory praise for social media’s ability to give anti-government protesters a voice. But University of North Carolina Professor Zeynep Tufekci told an audience at Harvard’s Berkman Center for Internet and Society, that it’s not zero-sum gain for protesters.

“What we have lost is for a movement to dominate the narrative in a particular way,” Tufekci said. “Previously, if you didn’t’ have media cooperation you might have been stuck.”

She added, “Now, you’re kind of stuck in the middle. You can get a lot of attention, but you can never dominate the narrative.”

There was a glimmer of hope on Thursday as a cease-fire was organized so that President Yanukovich and dissident leaders could try to hash out a peaceful resolution. But according to multiple media reports, negotiations have broken down and protesters near the capitol are fortifying their positions, rebuilding barricades close to the president’s home.

“Hours of conversation were spent about nothing,” opposition leader Vitaly Klitschko told the press. “There is no sense sitting at a negotiating table with someone who has already decided to deceive you.”

The prospect of a civil war is rising as protest spread beyond the capitol, into regional cities like Lviv, Ternopil, Ivano-Frankivsk, and Rivne where government buildings have been seized by protesters.