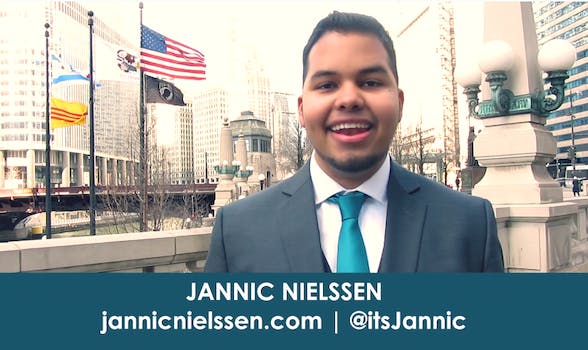 This recent grad has just 6 days to land a job or leave the U.S.—he's hoping his Kickstarter résumé will do the trick.

Jannic Nielssen is looking to kickstart his career, so he borrowed a page from the most successful crowdfunding platform out there.

Nielssen graduated from Millikin University—located in Decatur, Ill.‚— with a degree in communications. Like most people his age, he’s having a tough time finding a job. But instead of cold calling and sending unsolicited letters of interest to companies in hopes of hearing back from one of them, the recent grad has taken a proactive approach and launched KickJannic, an online resume that looks a lot like a Kickstarter project page.

Nielssen, who’s looking to get a job in social media or advertising, notes on his page that he got the idea for the clever resume from Phillippe Dubost. In January 2013, the French Web product manager turned his CV into an Amazon product page.

Nielssen chose to emulate the crowdfunding site for a reason.

“Kickstarter serves as a great metaphor for my situation, from the time limits set on projects, to the people that take it upon themselves to help support and launch something,” he writes on KickJannic.

Nielssen was an international student at Millikin—he’s a citizen of Jamaica and Norway— and he was in the United States on a student visa. After graduating, he applied and was approved for Optional Practical Training status, which permits him to remain in the country for a year. It also requires that he get a job within the first three months.

That “6 days to go” counter on isn’t just a gimmick. It’s how long Nielssen has to go before he loses his OPT status. And instead of asking for money, Nielssen’s page is hoping his backers spread the word via multiple social media platforms. He’s even offering incentives like a free social media consultation for those who pledge to share his resume.

It’s unclear whether Nielssen’s campaign will succeed given how little time he has left. But if he doesn’t, he can take solace in the fact that he’s really good at thinking outside the box. We hear that’s a very attractive attribute for employers.