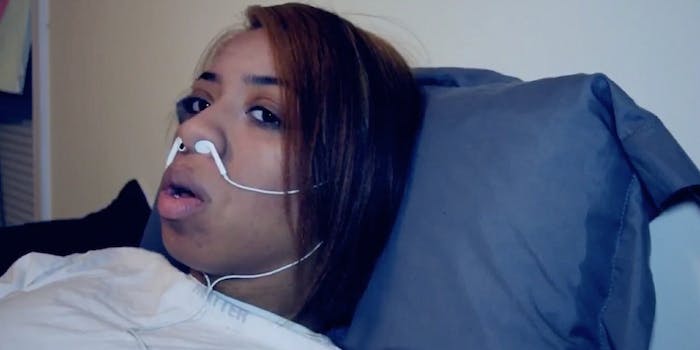 Khadi Don is a comic chameleon.

Like most entertainers, Khadi Don wears many masks. But she plays characters you might not be all that familiar with. Like the chick with super small titties. Or the friend who stinks up the bathroom with a massive dump. And she’s not afraid to really go there—she once came after Stacey Dash, whom we all know has a bitter relationship with Black Twitter.

“They’re actually my alter egos, they’re part of me. I got my crazy side, I got my nice side or my friends that I play,” Don said. “The crazy girlfriend is me, the friends are me. Between them and my personalities, that’s where i come up with the characters.”

The crazy girlfriend is an archetype that Don excels at bringing to life. One of her most popular videos was her remix of Eve’s “Who’s That Girl,” which transformed the song into a catchy battle cry for anyone who ever spied some rando creeping boo’s Instagram and commenting “bae.” The clip has over 262,000 notes on Tumblr and more than 2 million views on Facebook.

When you see someone flirting under bae's pictures. pic.twitter.com/wtnCWv5f7P

More recently, Don played a girlfriend in the coma who wakes up when she hears that her man has a new girlfriend. (And yes, those are definitely earbuds Khadi’s using as breathing tubes).

Using ridiculous characters and situations makes sense considering Don’s favorite comedies. White Chicks, the Scary Movie franchise, A Haunted House, all the Friday movies, Don’t Be a Menace to South Central While Drinking your Juice in the Hood, and anything with Eddie Murphy (especially Norbit) have helped inspire the 21-year-old viral phenomenon.

Don’s knack for making people laugh dates back to when she was 12 years old and spoofed “Trapped In the Closet” for her friends and family. But she didn’t hit it big on the Internet until late 2013, with a Vine parodying Rihanna’s interview with Oprah. She recorded a voiceover discussing Chris Brown’s dick size that got thousands of likes. That’s massive considering how small Vine was just three years ago.

“I was just crazy, it was unexpected. I didn’t think it was going to get popular at all,” Don told the Daily Dot. “I was happy. I knew from there maybe I should keep it up.”

And so she did. Don might have gotten a viral jumpstart with Vine, but she began posting longer videos and sketches on Instagram and Facebook. Like any aspiring online comedian/actress/entertainer, she understands the necessity of being on several platforms: She wants as many eyes on her stuff as possible.

On her Twitter account, Khadi interacts with her fans, often retweeting their support and fawning comments about her hilarious videos. She also keeps up with the latest memes and current events, making some fire content that will make you laugh until it hurts.

“I want to do everything, but my main one is definitely to get into acting. I want to get off into music, I do art, maybe designing clothes, I definitely want to go down different paths,” she said.

At the gas station after not winning Powerball pic.twitter.com/AyxX1BhYPm

Earlier this year, Don moved from her hometown of Grand Rapids, Michigan, to Los Angeles to pursue her creative ambitions. She’s hitting up auditions and hopes to be in a movie soon, but she’s thankful that she got her start in the Midwest.

“I think it was kind of humbling to be in a city so small and to be able to go to malls and events and people come up to me and know my page. It gave me the confidence to go to another city to move,” she said. “It was best for me to start at home. If I had been in California at the start there would’ve been a lot of competition.”

Since moving to L.A., Don has kept up her ridiculous antics. In one video, she and a friend pull on some puffy black trash bags and get down atop a Frito Lays truck, inside a Target shopping cart, and more. The concept behind the video: “Missy Elliot videos be like.”

But the clip caught the eye of the iconic rapper herself, who retweeted the video out to her 2.95 million followers.

No matter where Don goes next, people won’t be asking who she is for long.