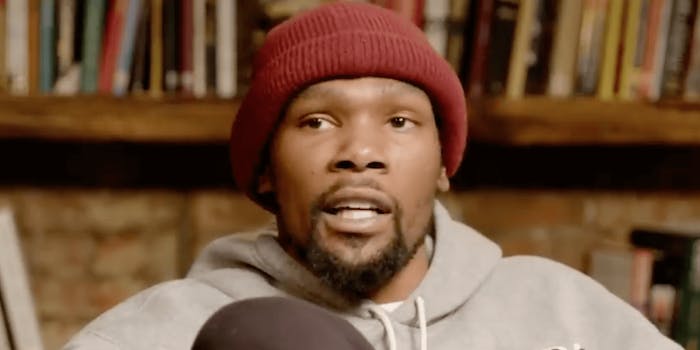 Kevin Durant and Rihanna roast each other about COVID-19

Kevin Durant, with his two NBA titles and two NBA Finals MVP awards, is one of the best basketball players of all time. He’s also a social media legend. Known more for blasting his detractors with various burner accounts, he can also do work face-up. Global superstar Rihanna found out about his talents firsthand, albeit in a playful way.

During DJ Spade’s Instagram Live session on Saturday night, she joked about Durant having coronavirus, questioning whether she should wear a mask in the chat, but then wished the Brooklyn Net a speedy recovery.

“Is KD allowed in here?” Rihanna asked. “Should I wear a mask to live?” She then wrote, “But foreal get well soon KD.”

Durant identified himself as one of the four Brooklyn Nets players that tested positive for COVID-19. In response, he addressed her as “Robyn”—her first name—and questioned if she’d just returned from the European continent, where the coronavirus has wreaked havoc over the last five weeks. He suggested the possibility that Rihanna could have picked up the virus without showing any symptoms since strains of COVID-19 have been “lurking” across Europe since December.

She had a cough, to which Durant quipped, “she said it was the swisher sweet but that cough sound real Rona-ish…I know.”

Of course, fun can’t be had without Drake finding his way into it, probably lurking on Rihanna: “we have to dead the treyfive corona jokes.” (Kevin Durant has worn number 35 in his career.)

It was all in good, sanitized fun.