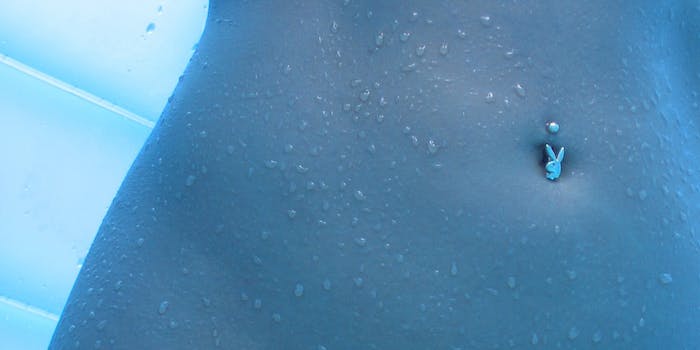 Cheating is cheating, even if the other woman is transgender

Objectifying transgender women might make for effective click-bait, but it's bad for everyone.

I recently provided a brief statement to a popular celebrity tabloid regarding former NFL player (and husband to Hugh Hefner’s ex-girlfriend Kendra Wilkinson) Hank Baskett’s alleged extramarital affair with a transgender woman named Ava London. The reporter wanted to know why a cisgender man who identifies as heterosexual would pursue a sexual relationship with a trans woman. 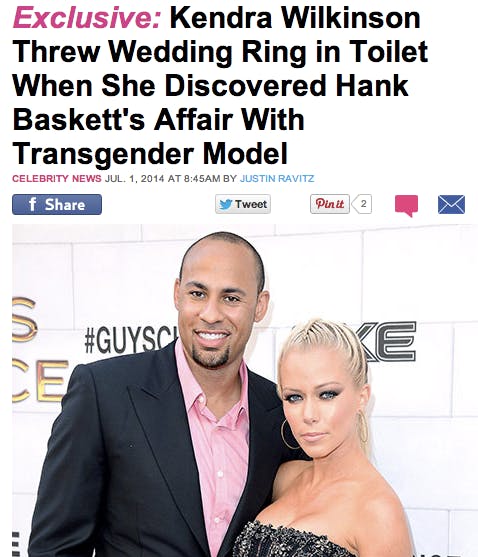 Admittedly, I had some apprehension about talking to the tabloids, who prey on the Internet age’s worst impulses, about such a sensitive subject. Since I gave my statement, gossip site and media channel TMZ has reported that the media company this reporter works for has been accused of “spreading lies” by London, and that she actually called the cops and had her lawyer issue a cease and desist letter due to stalking and harassment.

Nevertheless I was hoping, perhaps in vain, that as a sex educator I might be able to set the record straight about some harmful popular myths that surround trans women’s sexuality.

The reporter’s questions made it very clear that she had two specific agendas surrounding story. Firstly, she wanted to know if sexual contact with a transgender woman meant Baskett was gay. Secondly, she seemed to believe Baskett’s extramarital affair was more disturbing because the other woman was transgender.

“Do you think Kendra feels betrayed that her husband cheated on her with a transsexual?” She asked.

“I think she probably just feels betrayed because he cheated on her,” I replied.

I remember similar snarky comments surfacing when Hugh Grant was caught cheating on Elizabeth Hurley with a sex worker, who was also a woman of color. The tabloids seemed to feign horror that Grant could possibly enjoy sex with someone who wasn’t as white, wealthy, or conventionally attractive as his then-wife.

Ostracizing the “other woman” on the basis of her race, appearance, socioeconomic status, or gender identity plays into harmful societal stigmas and ignores the real problem at hand: it sucks to find out that your partner cheated on you, regardless of who they cheated with. 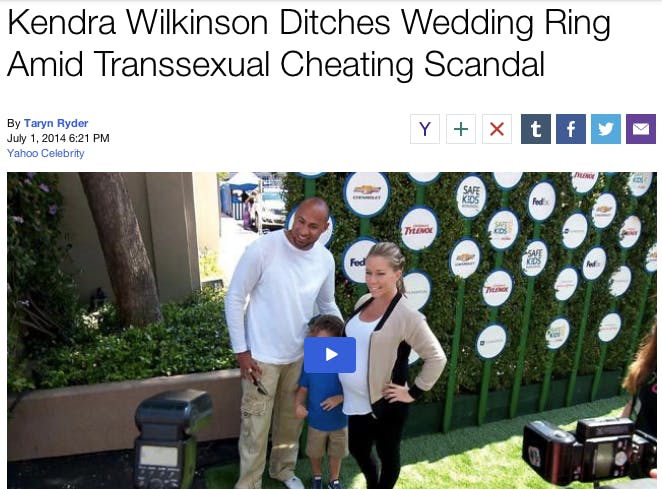 Objectifying London on the basis of her gender identity may make for good click-bait or sell magazines, but it plays into a toxic patterns of sexualization and dehumanization of trans feminine people in our society. Trans women (and especially trans women of color) are disproportionately at risk for sexual assault, HIV infection, violence, and murder. Our society still has a long way to go when it comes to understanding and respecting trans people.

One of the most important things to remember is that you don’t get to make assumptions about another person’s gender identity on the basis of their genitalia—or some other factor. While genitals may dictate the gender we are assigned at birth (though not always), they are not the sole determinant of an individual’s gender identity.

It is cruel and misguided to affirm a trans person’s gender identity on the basis of whether or not they have had genital surgery. Not all trans people desire gender-confirmation surgery. Surgery may be out of reach for many who desire it due to financial or medical reasons, and more importantly, another person’s genitals (whatever their gender identity) are really none of your business unless you’re their sex partner or physician.

So can Hank Baskett be labeled gay because he touched a trans woman’s genitals? No. Ava London is a woman, irrelevant of the specifics of her anatomy. As a friend put it, “He didn’t touch a man’s penis, he touched a woman’s penis!”

And honestly it would be an oversimplification to label Baskett gay even if he were to touch a cisgender man’s penis. According to Dr. Justin Garcia of the Kinsey Institute:

“Researchers often like to separate three components of sexual orientation:  sexual behavior, sexual preferences, and sexual identity. We often use MSM (men who have sex with men), because we know there are more men in the U.S. who have had a recent sexual experience with another man, than those who identify as homosexual or bisexual. What we understand better today is how people’s sexual experiences and behaviors are not necessarily indicative of how they define their actual orientations or preferences, nor should they be indicative of labels that are prescribed to them. Indeed, variation in the norm!”

A 2008 study found that almost half of cisgender men who had relationships with trans women within their sample identified as heterosexual. Unsurprisingly, this is because they viewed trans women as women. Period.

Unfortunately, it is unlikely that the tabloid media will take a more sensitive approach to trans issues any time soon, because scandal sells. It gives me hope that trans heroines like Laverne Cox and Janet Mock have emerged to offer a deeper perspective in the public eye, and we can hope that the societal perceptions of trans issues will shift in time.

In the meantime, calling a minor celebrity’s sexual orientation into question because he allegedly hooked up with a gorgeous woman seems a little bit silly, when you consider his cisgender wife’s fame stems from a television reality show that documented her polyamorous relationship with a wealthy octogenarian and two other women. After all, nobody speculates about whether or not Kendra Wilkinson has a fetish for senior citizens because she used to be in a relationship with one (nor would I really care if she did).

I just wish the media would present this story for what it really is: another dime a dozen story of celebrity infidelity, regardless of the genitalia of the individuals involved.