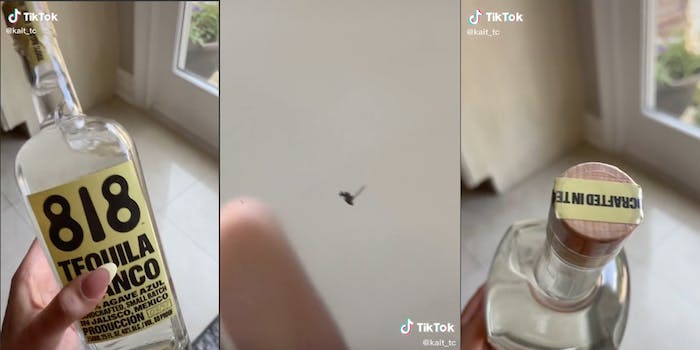 'I guess she couldn’t afford to put a scorpion or at least a worm.'

Update 3:33pm CT July 21: 818 Tequila seems to have made up for the tainted bottle, as @kait_tc received three new bottles—and merch—from the company to remedy the situation.

In a statement to the Daily Dot, representatives for 818 said the issue was resolved within 24 hours. They also stated:

“Bottling is performed in an artisanal environment that is not perfect, incidents like this are extremely rare but they can happen. We’re transparent about our tequila-making process and will continue to uphold the highest standards of health and safety from the day we plant the agaves to when the bottles of 818 tequila are sustainably packaged to share with the world. We’ve been in touch with Kaitlyn and have provided her with a new bottle of 818.”

Things seem to just keep getting worse for Kendall Jenner’s tequila brand 818. Most recently, a TikToker posted a video of what appears to be a winged bug floating in a sealed and unopened bottle of the liquor.

“Kendall, serious question: Here’s my new bottle of tequila, sealed, unopened. I went to go enjoy a nice shot and I see this floater just hangin’ out and about in the bottle,” @kait_tc says in the TikTok.

The video zooms in on a small black object—which appears to have wings—floating in the clear tequila.

“Looks like he’s gone through it cuz he only has one wing left, but he’s swimmin’ around in your tequila. Someone’s shot was gonna hit extra hard.”

This is not the first time the brand has come under fire. Previously, Jenner was accused of cultural appropriation, ripping off another tequila company, and overcharging for her product.

Promotional images for 818’s launch showed Jenner wearing braids and standing in agave fields next to a dilapidated pickup truck, and filtered in a similar style that many American filmmakers use to make Mexico appear exoticized.

“Kendall Jenner can go to hell with this blatant [exploitation] of the stereotypes of Indigenous women from Mexico,” @mottisjandra wrote on Twitter about the images.

Others suggested 818 was a ripoff of the Austin, Texas-based tequila brand 512. The company addressed the similarities on Instagram on March 19.

“Note the similarities, including the color, the name and it is made at the same distillery in Tequila Mexico as ours. Their batches are being distilled twice. Ours three times. Yet she is charging twice as much per bottle…Doesn’t seem very cool,” @tequila512’s caption reads.

The prices don’t exactly line up with the statement, but 818 does cost significantly more than 512.

Many TikTokers weren’t surprised by the bug in the bottle, and said it was @kait_tc’s fault for buying it in the first place.

“Why would you even buy that? Smh please buy authentic tequila,” commented @fashionology_.

“First mistake was buying Kendall’s tequila…….I guess she couldn’t afford to put a scorpion or at least a worm 😂😂,” said @unfriendlymexicanhottie.

“Haha when you buy a product from a culture vulture and then this happens!!!!–hahaha laughs in Mexican,” wrote @thebeautifulbrown.

Others are defending Jenner, saying it isn’t her fault personally for a bug to end up in a bottle of 818.

“Everybody acting like it’s Kendall’s fault that one bottle has something,” commented @chantimandel.

The Daily Dot reached out to the TikToker and 818 for comment.