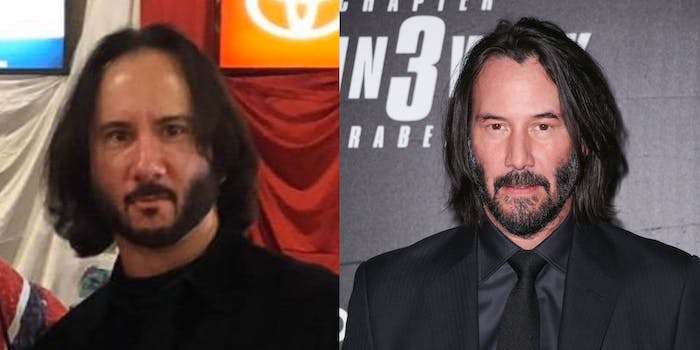 A photo of a Keanu lookalike next to a Confederate flag-touting Trump supporter is turning heads.

Photos of a fake Reeves cozied up with a Confederate flag-repping Trump supporter none-the-less managed to fool some people. Upon closer inspection of the image, however, most people realized that—while convincing—the man was clearly a Reeves lookalike. The imposter’s shaggy black hair and simple attire did the John Wick star, but up close it was clear he shared little in common with the popular actor.

That didn’t stop one man at the Maryland Bike Show from mixing them up. The Facebook user shared images of himself posing next to “Reeves.” “Maryland Bike Show this past weekend with Keanu,” he wrote alongside the photos. “Apparently he restores antique bikes and is a Trump supporter!”

Initially, people were shocked. Trump supporters flocked to the news, overjoyed at the prospect that such a well-liked star might be in their political camp. Reeves fans who are less fond of Trump likewise jumped on the rumor, far less enthused at the prospect. Then, upon viewing the images themselves, most people realized that the man in question was a fraud. Jokes and memes quickly followed. “That’s not him,” one person joked on Twitter. “You’ve captured his stunt double!”

There were, of course, a number of people who believed it really was Reeves in the photo. They tweeted their delight that such a beloved actor was on Team Trump. “Keanu Reeves is a Trump Supporter..I can go on with my day now,” one person wrote.

Who’s going to tell them?

Rumors regarding Reeve’s political views have been swirling for a while now. The 55-year-old actor has historically kept his political stance to himself, but that doesn’t stop his fans from dreaming about his past voting record. People are so fixated on it, in fact, that in 2018 Snopes had to debunk a popular rumor that Reeves is a Trump supporter.

The circulating image will likely muddy the waters even more. While it is very clear, for most, that the man pictured is just a Reeves lookalike, some will doubtless cling to the idea that the real deal is casting a MAGA vote this November.