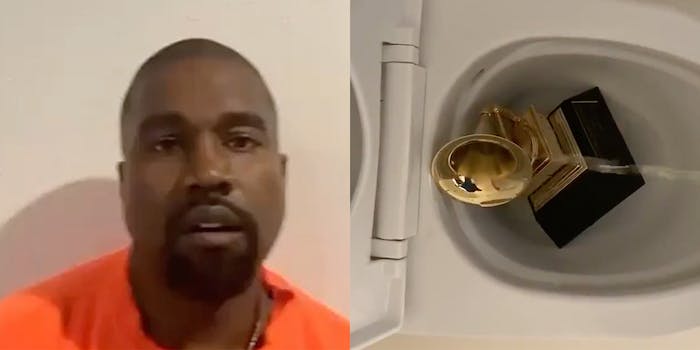 Kanye West took his thoughts—and one of his Grammy awards—to the bathroom. And then he peed on the statue. And then there were memes.

On Wednesday afternoon, the rapper tweeted a video of himself apparently peeing on a Grammy statue (presumably one of the 21 to his name). He captioned the post, “Trust me … I WONT STOP.”

West has boasted about his multiple Grammys in the past, but maybe they don’t mean so much to him anymore.

This came after a series of Twitter rants deploring the lack of Black ownership in ownership roles. Early Wednesday, West exploded on Twitter about white-owned companies controlling Black Americans, pointing to the NBA and music industry as examples.

This was followed by a storm of tweets calling Black Americans to claim power and self-ownership.

Acclaiming himself as “one of the most famous people on the planet,” West tweeted that Universal Studios refused to tell him what his “masters cost,” implying that he’d buy them out.

West, who has spoken publicly living with bipolar disorder, made clear that sticking his Grammy in the toilet was an act of defiance against the music industry. In the same hour, he tweeted his confidential contract literally one page at a time, called for retweets from celebrities like Drake and Taylor Swift, and cited multiple Bible verses.

His fans had mixed reactions to the storm.

Many, of course, created memes about the peed-on Grammy.

Others though, simply count this as the next event in a never-ending barrage of weird 2020 occurrences.