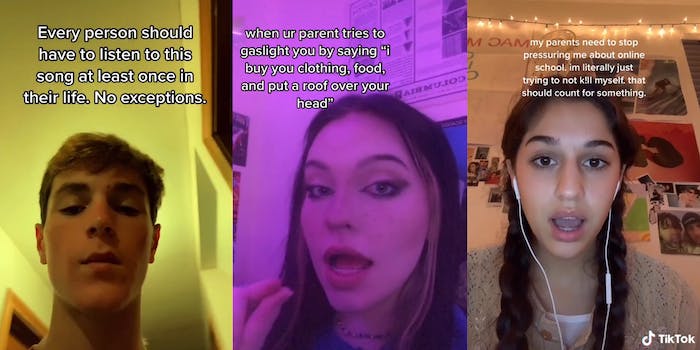 'Whoa, once again I am a child' is being reinterpreted.

We found out what Kanye West thinks of TikTok this summer: He was “disturbed by a lot of the content.” But young people are using one of his songs to confront some disturbing, traumatic things.

West’s song “Ghost Town,” from his 2018 album Ye, has become popular on TikTok. More specifically, 070 Shake’s verse from the song, and the lyric “Whoa, once again I am a child,” is being used to address issues with parents and boundaries, after circulating in late September.

“When ur parent tries to gaslight you by saying ‘i buy you clothing, food, and put a roof over your head'” goes one caption.

“When my mom vents to me about her rocky relationship with my dad and our financial problems,” says another user.

While many of the videos address kids feeling saddled with adult or parental problems, other TikToks spoke to trauma, mental health, and sexual assault.

Others were thinking about Timothée Chalamet.