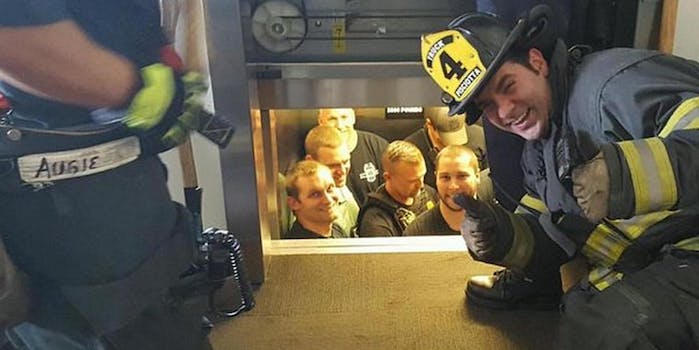 Would have been a great time to commit a crime.

The Kansas City Fire Department were probably surprised by the damsels in distress they recently had to save: 12 police officers stuck in an elevator.

According to CNN, the dozen cops were helpless in a stalled elevator at the Kansas City, Missouri, police academy. So, who you gonna call? Their fire-extinguishing, cat-rescuing, calendar-beefcake brethren arch-rivals.

This shot of @KCMOFireDept #Firefighters rescuing @KCPolice from a stalled elevator wins the internet for today. pic.twitter.com/2O0ArPzPIm

The Kansas City Missouri Police Department also shared the humorous image on Facebook, along with an explanation as to what went down:

About 1 p.m. yesterday, April 27, 12 Tactical Team officers got into the elevator at our Police Academy. Then they couldn’t get out. The weight limit had been exceeded. So Academy staff called for the Fire Department to respond. They did, and we appreciate them getting our officers out! Everyone was physically safe, but egos were severely injured.

Lesson learned: Don’t stick 12 cops in an elevator, or the local fire department is going to joke about saving your ass for years.