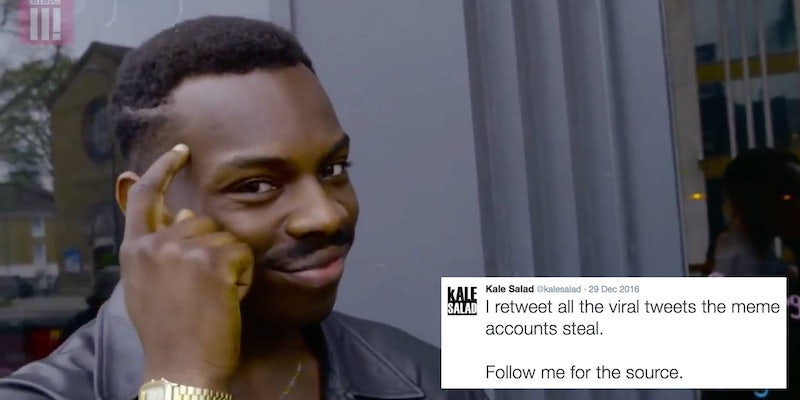 The internet’s open nature is a blessing and a curse, and Twitter is a perfect example of this give-and-take at play.

On one end of the content spectrum, the ridiculous, Zola-style tweet threads and viral photos provide hours of entertainment. But there are countless “parody” accounts like @Dory, @Tina and others water that down comedic gold and steal the likes and retweets the originators rightfully deserved.

That’s where Samir Mezrahi, a.k.a. Kale Salad, comes in.

I retweet all the viral tweets the meme accounts steal.

Please RT this for awareness since I do not tweet myself

Mezrahi’s account is a Twitter vigilante. Kale Salad finds the original tweets of replicas that these cheap accounts have ripped off and shares them for the Twitterverse to admire.

me as a teacher pic.twitter.com/Tiw7GoMKLP

Me: sorry can you turn that music off?? it brings back bad memories of a loved one…
Someone: we're playing Livin La Vida Loca
My head: pic.twitter.com/QbTMn1RmtZ

Hulk Hogan is trapped in my computer pic.twitter.com/gmKI7yROhg

In an interview with Paper, Mezrahi, who’s worked on social teams for BuzzFeed and the Dodo, said he started the account as a way to reward content creators and properly credit their work.

To find original tweets, Mezrahi uses Twitter’s search feature and sometimes looks through the copier’s video URL to see if it contains information from the source. He also receives tips from followers.

“I’ve received some thanks,” Mezrahi told Paper. “Sometimes people send me their own tweets that have been taken and they always appreciate the retweet.” He said he’s been surprised at how happy people have reacted to the premise of Kale Salad.

“It’s also been interesting to see people who’ve had their tweets stolen in the past, months or years back, looking for some sort of ‘vindication’ since it was taken,” Mezrahi said.

This must mean that what we are doing is working pic.twitter.com/v9m79EDGWj