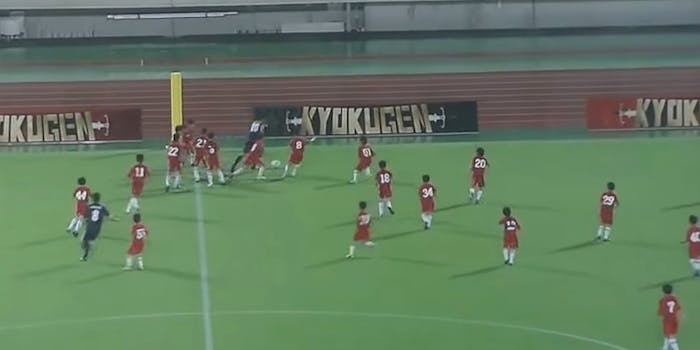 Who are you rooting for?

Anybody who doubts soccer’s a game built around pure speed and spacing should check out this December video starring Japanese nationals Shinji Kagawa and Hiroshi Kiyotake, two midfielders who together take on a massive total of 55 Japanese youth players.

The video, which first appeared on local Japanese television, finds the Manchester United star and his FC Nürnberg teammate swiftly navigating through a sea of young kids in red shirts on a rainy night in Japan, using superior unchallenged speed and a few particularly well timed passes to steal a quick 2-0 victory. Here’s hoping the kids had at least some semblance of fun playing.

Kagawa and Kiyotake have had slightly more trouble than they did in December down in Brazil at the World Cup this past week. On Sunday, the midfielders’ national squad lost a heartbreaker to the Ivory Coast. Next Tuesday should prove just as difficult: Eventual opponents Colombia are now just four days removed from a 3-0 thrashing of European whipping boy Greece.