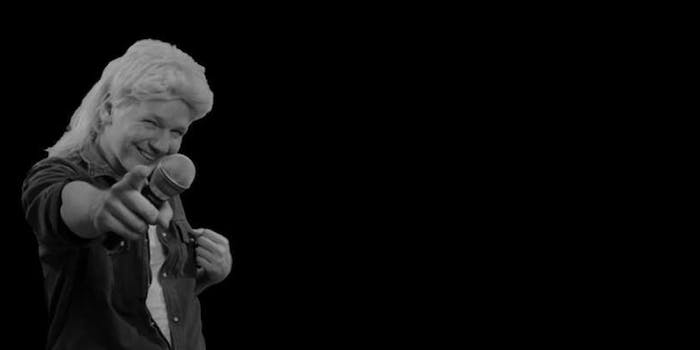 It's maybe the third-most ridiculous thing to happen this Australian election cycle.

It’s come to this: Julian Assange has adopted a mullet wig to sing an ‘80s-style rock ballad for a popular YouTube channel.

It seems a natural step for the circus that is the 2013 Australian federal elections, which has so far included a Prime Minister candidate declaring “No man is the suppository of all wisdom” and a woman who, before she abandoned her quest to become a member of Parliament, announced that Islam was a country.

Assange is the founder of the transparency site WikiLeaks, which has formed a political party to back him in this election cycle. Despite having some trouble as election day nears—or maybe because of it—Assange filmed his part from his digs in the Ecuadorian Embassy in London, where he’s been holded up for more than a year.

In the video, Assange joins Rap News, a popular YouTube group that, well, raps about the news. He interrupts their coverage of the 2013 elections to get a makeover to seem more stereotypically Australian, then sings. Passionately. ‘80s-ly.

If that clip seems familiar (much more likely if you’re from Down Under), it’s a modified cover of “You’re the Voice,” a hit by Australian pop star John Farnham.

Unfortunately, when he’s singing, Assange isn’t the voice. His singing was dubbed; Rap News credited the vocals to Chris Doheny.