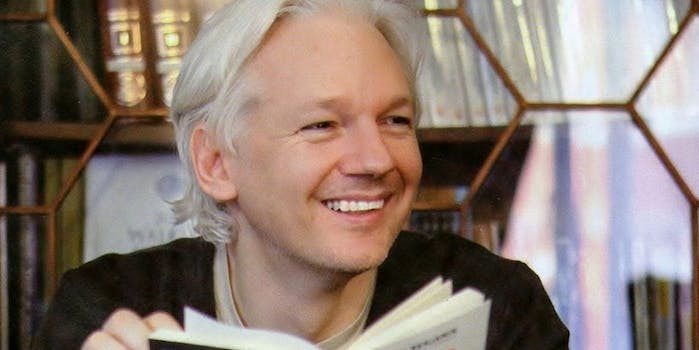 Win a date with Julian Assange—sort of

What's the occasion? Assange's official announcement that he is a candidate for senator in the next Australian elections.

It’s a dream date: Matching wits with the best in a Google Hangout, wrestling with the meaty political questions of the day alongside four other crowdsourced intellectuals chosen by engaged netizens; then being whisked by jet across the vast ocean to glamorous London Town on an all-expenses-paid trip. There, you’ll get some actual alone time with your international man of mystery, Julian Assange.

OK, perhaps we’re stretching this a bit. Because the entire thing is sponsored by the very serious Deakin University, the ninth-largest university in Australia, on the occasion of Assange’s official announcement that he is a candidate for senator in the next Australian elections.

This is srs bsns.

Want to fly to London to meet Julian Assange? Watch the video to find out more – http://t.co/eYlGdD4XNa #AskAssange

The campaign is a Twitter hashtag #AskAssange as well as an OurSay event. The online platform encourages participants to submit questions to a given public figure, in this case Assange, and to use their seven default votes to upvote those questions they think are worthwhile. Instead of attracting boatloads of bright-eyed students, fangirls, or WikiLeaks party faithful, the questions tend toward the fraught, the personal, and the downright nasty.

The currently leading question, from Dor Batcyka: “Could you comment on the paradox of Russia, a country with atrocious and often violent attacks on free speech, granting Snowden temporary assylum [sic]? As well as the geopolitical game of musical chairs you helped orchestrate?” It currently has 524 votes and six comments, the first of which is Amit Chaundry’s: “This touches on a very important issue, and the fact that assange remains relativdly silent on this signals one thing – ILLUMINATI.”

Of course it does.

Presuming either Chaundry or Batcyka would care to meet Assange, we can look forward to an entertainingly contentious Google Hangout and an even more fraught and Scorsese-like face-to-face encounter soon. It’ll have all the spontaneous joy of meeting your new mother-in-law without the consolation of having a spouse to complain with later.

Voting continues until 10pm next Monday, Aug. 12. The Hangout takes place on Google+ on Friday, Aug. 16.

The showdown? That’s yet to be arranged.