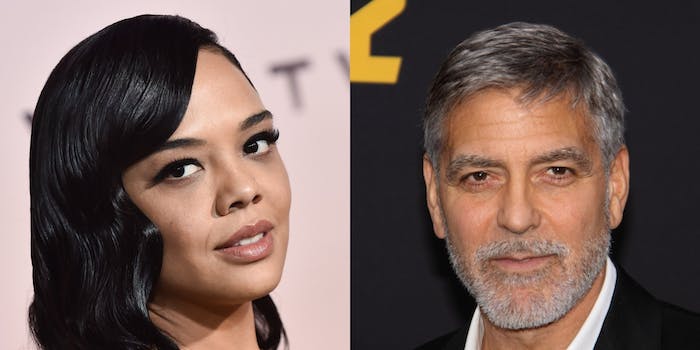 What do we expect from a celebrity photo shoot? Glamour, maybe. Or an interesting image that tells us something about the subject’s personality. That’s why so many people are morbidly obsessed with a new W Magazine photo series by fashion photographer Juergen Teller: It takes gorgeous, beloved actors like Tessa Thompson and George Clooney and makes them look aggressively unphotogenic and awkward.

To be clear, this isn’t just a “celebrities in a casual setting” photo shoot. We’ve all seen that before. No. The issue here is that in virtually all of Teller’s photos, the framing looks rushed and half-assed, the lighting is uninspired, and the subjects are posing clumsily in a random street—or perched on a specific tree that Teller really seems to like. Basically, it’s a classic case of “My kid could do better than that!”

Teller is a prolific photographer, with a successful career in high-end fashion and magazine photography. He’s popular enough that Kim Kardashian and Kanye West sought him out for a personal photo shoot—which does, admittedly, include a photo of Kanye standing in front of a tree looking sullen. Spontaneous, “everyday” photos of famous people are definitely a recognizable element of Teller’s style, but you don’t get far in this industry by making everyone look that bad.

The problem with these W Magazine photos is twofold: They’re enormously unflattering, and they look like anyone could have taken them. Confirming many people’s suspicions, Riz Ahmed tweeted (as a compliment!) that his photo took “20 seconds, two clicks,” which may explain why the photographer accidentally caught his own reflection in a car window elsewhere.

In response, Twitter users shared other candid and unflattering celebrity photos that would have looked right at home in Teller’s latest series.

It’s possible that we’re all just missing some elite artistic strength of this photo shoot. After all, Teller does have a distinctive style that’s clearly worked well for decades. His other celebrity photo shoots generally have more wit and personality, but the awkward poses and stark lighting are part of his shtick.

The problem is that in an era when people know how to make themselves look good on Instagram, it seems absurd that someone would be paid (presumably) a lot of money to make A-list actors look worse than a normal person’s casual iPhone tourist snaps. Then again, maybe Teller was thinking five steps ahead of the general population, and this was all just an elaborate ploy to generate memes.