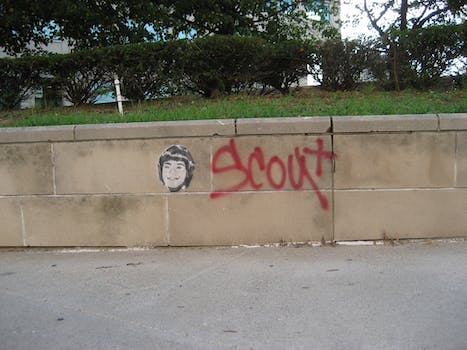 The literary grande dame thinks To Kill a Mockingbird is just overrated YA. She's half-right.

By now, astute readers know that no good can come of seeing the words “Joyce Carol Oates” and “Twitter” in the same sentence. The matriarch of modern American fiction may be a perennial frontrunner for the Nobel Prize for Literature, but her social media gaffes are almost as prolific these days as her writing output.

Now she’s inserted herself into the controversy over the upcoming release of Harper Lee‘s unpublished first novel, Go Set a Watchman, a sequel to To Kill a Mockingbird.

Oates, as it turns out, has never read To Kill a Mockingbird, but that won’t stop her from giving her opinion on it.

Although Go Set a Watchman is a sequel, it was written prior to Lee’s classic novel and allegedly rediscovered by Lee’s lawyer, Tonja Carter. Many of Lee’s friends and fans believe Carter is manipulating the 88-year-old author, who is blind, hard of hearing, and nursing-home-bound after suffering a stroke in 2007. Despite her lifelong abstinence from the limelight, her years since the stroke have been earmarked by litigation and allegations of exploitation by her literary agent and her lawyer.

Casting further doubt on the situation is that the book deal is occurring just two months after the death of Lee’s sister and longtime advocate, Alice Lee. An utterly bizarre interview with Lee’s Harper-Collins editor, in which he freely confessed no one on his editorial team had spoken with Lee directly, made the situation even more confusing.

Fortunately, Oates was there to weigh in.

It does seem that perhaps the elderly Harper Lee is being exploited; yet still. the "sequel" will be of interest to students of writing.

Had Oates left things there, all would be well. But then came the kicker:

Have to concede that I never read more than a chapter or two of "Mockingbird"–wonderful YA voice but Kafka & ambiguity intrigued me more.

Ouch. So not only is Oates dismissing, out of hand, a Pulitzer Prize-winning work that she didn’t even read. But she’s doing it because it’s a Young Adult novel? And Young Adult novels lack ambiguity?

Oates isn’t wrong. Lee’s novel is undoubtedly YA. It has a 6-year-old narrator, Scout Finch, and focuses on events involving her 13-year-old brother and their father. It’s most often taught to children in junior high and early high school. Still, its overwhelming cultural impact over time means critics have readily appropriated it into the realm of high literature. So it’s refreshing to see its Young Adult themes so openly acknowledged.

Yet Oates is clearly calling it out as a YA in order to dismiss it as something inconsequential. This is where we point out that To Kill a Mockingbird regularly ranks ahead of the Bible as the most influential work of literature of all time.

It’s extremely odd that Oates would be so dismissive of Lee’s masterwork, given that she cites that great Young Adult novel by Lewis Carroll, Through the Looking Glass, as “the most profound literary influence of my life.” But then, as anyone who’s paid attention to the beleaguered Young Adult community is well aware, dismissing Young Adult fiction is all the rage lately.

Last July, Slate set off an endless wave of handwringing over youth culture by declaring that the idea of adults reading books for teens was “embarrassing.” Then Vanity Fair, writing about The Goldfinch, dismissed the work as a Young Adult novel and declared that it represented “proof of the infantilization of our literary culture.” New York Times critic A.O. Scott had his say next, roping YA into an essay on the demise of “adulthood” in popular culture, which prompted even more handwringing from critics pleading with readers to “grow up,” stop seeking “easy gratification,” and “ascend from Hermione Granger to Clarissa Dalloway.”

That last quote comes from the New York Review of Books, which also intoned at one point that “one does not pass from lower to higher.” The assumption of course, is that those pesky unambiguous Young Adult novels occupy the realm of “lower.” But then there is To Kill a Mockingbird, which, again, is more influential than the most influential book in human history. What exactly is higher and lower in this equation?

It’s possible that in another 50 years, J.K. Rowling might have surpassed Harper Lee as the world’s most influential author, just as Harry Potter might eventually surpass Atticus Finch, the great lawyer at the center of To Kill a Mockingbird, as the hero of our times. This concept may be difficult to accept, but even the greatest cultural treasures can lose value in the wake of what comes after them. If, as A.O. Scott feared, “adulthood as we have known it has become conceptually untenable,” then why shouldn’t our greatest Young Adult novels become our new, most prized cultural artifacts? Why shouldn’t John Green supplant John Steinbeck? Why shouldn’t Hermione Granger replace Clarissa Dalloway as our most prized literary heroine?

Much of Oates’ work itself has been about the tension between youth and adulthood. Her famous short story Where Are You Going, Where Have You Been?, set in the heart and heat of the ’60s, could stand beside any Sarah Dessen novel today as an exploration of a teenage girl struggling with issues of socialization, small-town boredom, sexual awakening, self-doubt, and low self-esteem. Her novel Foxfire: Confessions of a Girl Gang is an actual Young Adult novel in everything but the packaging.

On the surface, Oates and Lee couldn’t be more different: Oates has churned out nearly 100 novels, plays, short story collections, and nonfiction volumes over her career, all while remaining at the forefront of the literary world. Lee published only one novel and has since spent the rest of her life perennially refusing interviews and eschewing publicity of any kind. Oates scoffed at the lack of ambiguity she saw in To Kill a Mockingbird, but given that she only read a chapter or two, she may have failed to recognize how similar their social concerns are. To Kill a Mockingbird is not, after all, a book with trite conclusions or a happy ending.

More importantly, to dismiss To Kill a Mockingbird because of its status as a Young Adult novel is to overlook all the much more valid and important reasons to critique it, most notably that however much we love it, however influential it is, it is a dated book written by a white Southerner writing about racism from the perspective of white characters, intended for a white audience. To Kill a Mockingbird may well be the only book about racism some readers will ever read. It’s important to make room for more than one take on the subject, especially if that primary take is coming from a white author.

But these important kinds of critiques can’t take up much space in our cultural discourse unless we make room for them. As things stand, between critics like Oates genre-shaming Young Adult literature and gender-shaming the women who write it, there’s not much room left over for more nuanced discussion. In order to make room, perhaps something will have to give way, even if that something is the lofty cultural divide that attempts to separate the “high” literature from the “low.”

Oates wrote in Foxfire that “the heavenly light you admire is fossil-light, it’s the unfathomable distant past you gaze into, stars long extinct.”

The distant stars Oates is attuned to are the cultural stars of our literary past. Over time some of them, perhaps Oates herself, or even Lee, will burn out, and we will look to them no longer.

But there are new stars on the horizon, and their stories are younger than ever.

Photo via kathryn_rotondo/Flickr (CC BY SA 2.0)