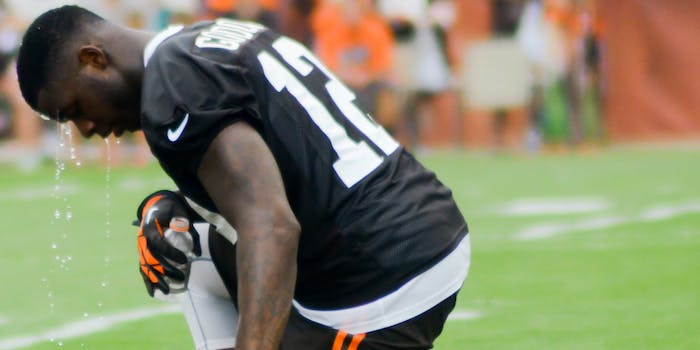 In the good old days of sports, athletes settled their interpersonal disputes behind the private walls of the locker room or in barroom brawls where all was forgiven and forgotten the next day.

Not so in the world of viral video when offhanded comments become clips shared ‘round the world, taking on a meaning far greater than intended. In the case of Charles Barkley, Cris Carter, Stephen A. Smith, and Josh Gordon, personal pleas delivered in an impersonal medium can turn angry and hurtful quicker than Marshawn Lynch can down a handful of Skittles.

The latest in what has been a dreadful season PR-wise for the NFL took place shortly after Cleveland Browns wide receiver Josh Gordon failed a league-mandated alcohol test resulting in a one-year suspension. Gordon began this past season suspended 10 games for testing positive for marijuana use.

Speaking to ESPN from Scottsdale, Ariz. (where Barkley lives), the former Phoenix Sun and Philadelphia 76er star spoke about his brother who died in his 40s, and the fear he has for the young NFL player. “Josh Gordon is going to die if he continues doing what he is doing,” Barkley said.

Speaking on the ESPN Radio program, Mike & Mike, Carter, who once battled drug problems during his years with the Philadelphia Eagles commented, “I feel for the kid. My situation was very, very similar. If I’m the Cleveland Browns—and it’s gut-wrenching for me to say this—I really think that the only thing that’s going to help the kid is if they release him.”

Far more pointed in his remarks, Smith said, “I am not in favor of Josh Gordon receiving a one-year suspension; I am in support of him receiving a one-year ban.” Smith goes on to point to the hypocrisy related to Gordon getting busted for alcohol rather than “the weed” (as Smith called it) given the NFL’s reliance on TV ad dollars from beer companies. That said, Smith added, “Its time for him to sit his butt home” referring to the multiple times Gordon has been sanctioned by the league and his employer, the Cleveland Browns.

But Gordon refused to stay silent in the wake of the latest round of criticism, and he took to Medium to speak his piece which focused on his anger over being taken to task by folks who didn’t know him.

Dear Sir Charles, Stephen A., Cris and other interested parties,

Thank you for your recent outpouring of concern about my well being. In what has been a difficult time for my family, friends and fans, you — and those like you — have taken it upon yourselves to express just how much you care about me and my future. For that, I am truly appreciative.

The thing is, though, you don’t even know me.

While Gordon shouldered the blame for letting his teammates and fans down, he explained that he had not used marijuana since 2012, and his failed test in 2014 could be attributed to being in the wrong place at the wrong time and being exposed to second-hand smoke.

As for failing the recent test for alcohol use, Gordon said he had two beers and two cocktails while on a chartered plane with some teammates headed for Las Vegas. He went on to say that he drank so infrequently, he wouldn’t even be labeled a social drinker.

While not making excuses for his behavior, Gordon pointed to his difficult childhood and the pride he takes in being able to leave the rough Houston neighborhood where he grew up to play college and professional football.

Again, I make no excuses for my past. That culture didn’t make me do anything I didn’t want to do, but when you judge me without actually knowing me, you deny the existence of the world I come from.

Needless to say, Twitter was abuzz with comments on the matter

So much respect for Josh Gordon. https://t.co/M3sxAyktHf

While others are not so forgiving.

Sorry I don't feel bad for Josh Gordon who has been arrested multiple times for driving while intoxicated and puts other lives at risk.

The worst part of this game of man in the middle is the piecemeal manner in which this point-counterpart took place. At no time were the three critics and Gordon together to engage in a heartfelt conversation where two professional athletes and one veteran observer could share their collective wisdom with this young, gifted, troubled athlete.