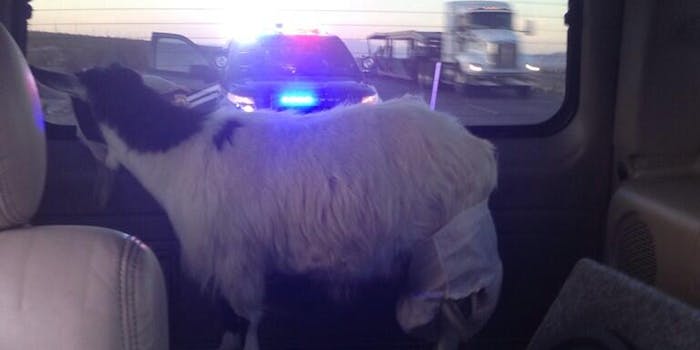 This is not a drill: Jose Canseco has been pulled over for driving while herding.

This is not a drill: Jose Canseco has been pulled over for driving while herding.

For reasons that you probably don’t want context for, cops apparently stopped the former baseball pro yesterday as he shared his SUV with a couple of goats. At least one passenger appears to be wearing a diaper.

Just got pulled over with goats in the car. The cop laughed at our poor goats . Awesome pic.twitter.com/hN1WiE7qDG

Canseco may be an ex–MLB player, but this star outfielder and two-time World Series champion has spent his postgame days chasing the record for wackiest sports celebrity on the Internet. Witness the time he decided Al Gore was dead, the time he got evicted but his “chandeleers” couldn’t come with, the time he claimed global warming could have saved the Titanic, and literally everything he’s ever said on the subject of the baseball industry’s use of steroids. When it comes to wacko tweets we secretly kind of wish we had the guts to make ourselves, Canseco is batting 1,000.

And really, when you think about it, what better way to compete for the title of must-follow Twitter celebrity than to tweet the time you got pulled over for having goats in your car?

Documentary on our fainting goats adventure begins now … Headed 2 jumping jack model in the middle of nowhere. All 4 our goats @ModelLeila

Does Canseco mean a Jumping Jack Motel? Do they allow goats or do they make an exception for former American League Rookies of the Year turned rogue tweeters?

More importantly, does logic inhabit Canseco’s world? A world where one can write a tell-all memoir about years spent taking illegal performance-enhancing drugs, then get stopped for having goats in your car only to be merrily sent on your way by amused police?

Come to think of it, that world seems pretty cool. I’ll have what he’s taking.