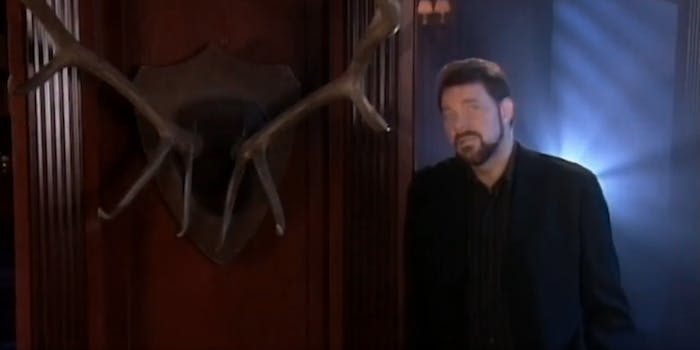 Jonathan Frakes has some questions for you in new meme

The 'Star Trek' actor is the subject of yet another meme.

The infinitely memeable Jonathan Frakes is back, and this time he has some questions for you.

Frakes is best known for playing Commander William Riker on Star Trek: The Next Generation and it’s that role that inspired the most (and studliest) memes, but from 1998 to 2002 he was also the host of the series Beyond Belief: Fact or Fiction. Each episode of the show featured Frakes presenting the audience with outrageous tales, some of which were true, some of which were false. It was up to the viewers to decern fact from fiction until Frakes revealed which were which at the end of the show.

That was over fifteen years ago, but it wasn’t until April of this year that Twitter user @softynthbear cut together 47 seconds of Frakes telling the viewers about lies.

jonathan frakes telling you you're wrong for 47 seconds pic.twitter.com/zU7HqQjGdN

The clip became a meme, with people using it to call out lies, particularly ones they told to themselves.

Me: I'm going to start exercising daily and eating healthy

The typically good-natured Frakes even responded, tweeting out the video along with the hashtag #proudtobeameme.

Well, it’s a good thing he enjoyed it because there’s a new video out and this one is even more bizarre than the first. While Frakes ended the show by answering questions, he started it by asking them. A new video montage, made by Twitter user Zane Golia, shows Frakes asking these questions, and without the benefit of context, the video becomes increasingly weirder every second.

I made this for no one and no reason. Plz Enjoy….

“Have you ever had the desire to write your initials in wet cement?”

“What do you want to be when you grow up?”

The questions go on and on for 42 seconds, with Frakes grilling you on random subjects until you’re ready to crack.

The tweet is set to eclipse the early Beyond Belief video, having racked up nearly 76,000 likes and over 25,000 retweets in just two short days.

I’ve watched it 3 times all the way through and “Can you remember the tallest man you’ve ever seen?” still makes me laugh so hard I tear up. (AND NO I DON’T THINK I CAN??!!)

My response to all of these questions: pic.twitter.com/Sa3eGLBn9f

Frakes has yet to respond to the video, but apparently, he’s seen it and he approves.

I DIDN’T NOTICE UNTIL AFTER I WATCHED THE VIDEO THAT THE REASON IT’S IN MY FEED IS JONATHAN FRAKES LIKED IT AND I AM GOING TO DIE pic.twitter.com/aWf1fjjqX2