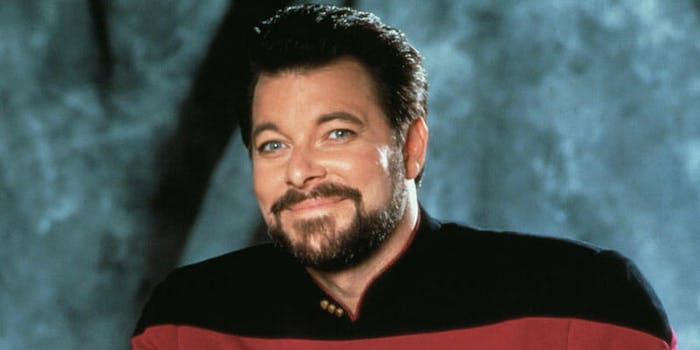 What makes Commander Riker from ‘Star Trek: The Next Generation’ so memeable?

It’s always interesting to examine how and why something becomes a meme. In the case of Star Trek: The Next Generation, however, it almost seems like a no-brainer. The first and easily most popular modern television incarnation of the Star Trek franchise, Next Generation was watched by the generation that went on to become the first heavy internet users. And if you drew a Venn diagram of online culture and sci-fi/geek culture, you’d practically have a circle.

The Captain Picard facepalm alone was the meme to launch a thousand memes, even breaking the wall between the internet and real life by inspiring merchandise such as mugs and 3-D busts. But that’s just the tip of the iceberg when it comes to Next Gen memes, of which there are countless variations. Annoyed Picard, the Picard song, and “I can’t see shit captain” are a few other popular ones. But today, we’re here to talk about someone else: Commander William “Number One” Riker.

It’s hard to put a finger on what exactly makes the character of Riker so ripe for memes. Maybe it’s his heroic, earnest swagger. Or reputation as the ladies man aboard the USS Starship Enterprise.

The aptly-titled “Riker sits down” video, which serves as a compilation of the numerous times that the character swings his leg over the back of a chair, has been viewed nearly 3.5 million times since being uploaded to YouTube in May of 2013. Some of the more observant comments include: “He needs to do that because his balls are so huge,” and “Will Riker doesn’t sit. He Mounts.”

Which brings us to the next order of business: Riker’s aforementioned status as one of the hottest pieces of male ass in the galaxy. In addition to his on-again, off-again romance with the ship’s counselor Deanna Troi (who he eventually marries in the 2002 film Star Trek: Nemesis), Riker bed quite a few women during his tenure on Next Generation—which was not limited to human or even half-Betazoid women. In one episode, the commander even falls for a member of an androgynous species who identified as female.

It’s his notoriety as a space Casanova that drives the most popular Riker memes on the internet, as a quick Google search uncovers. Here are just a few examples found on imgur and Tumblr:

Riker Strikes Her As #1

Another endless subject of internet fascination, of course, has always been Riker’s majestic beard, which materialized—nay, beamed in—between the season one and season two of The Next Generation. The story is that Jonathan Frakes, the actor who plays Riker, grew the beard during the hiatus because he just doesn’t like shaving.

When he returned to set, however, Star Trek creator Gene Roddenberry was such a fan (apparently praising it as “nautical”) that it had to stay. The series would have unarguably never been the same without it.

The beard, which is said to be the catalyst that turned the show from “meh” to “great,” has even inspired an Urban Dictionary entry as the antithesis of “jump the shark.”

Euphemism for a moment in time (typically in pop culture) where something or someone that was lackluster and/or underachieving suddenly and surprisingly became much better and exciting. Taken from Star Trek – The Next Generation, which many fans considered wanting until Commander Riker grew a beard at the start of Season Two, after which the show was solid and well-received for the rest of its run.

A more recent example of Riker-related internet tomfoolery comes to us from the excellent Riker Googling Twitter account, which tweets absurd examples of things that Riker might search for on Google. Some of the tweets are directly Star Trek or space-related, while others simply query things that an everyday normal Joe Schmoe might wonder, such as one posted recently that asks: “are muffins cupcakes?” (Consensus: No … ?)

The joke is inherently funny to anyone who has ever wondered what exactly is going on in that big, sexy bearded head of his. Or even to anyone who hasn’t, the mental image of Riker sitting down, squinting his forehead, and typing something like “can people change” into a search engine is just pure comedy gold.

Here are a handful of some of the recent funny examples.

how to stop fascism

what are the yellow lines for in the holodeck

why did elon musk invent the borg

has anyone ever died playing holodeck tetris

how much caffeine can a human take

Even Jonathan Frakes is a fan of the account, and he will occasionally “like” or respond to the Ryker Googling tweets.

Sondow first came up with the Picard account while doing a Next Generation rewatch as a way to amuse his techie friends, and it quickly grew in popularity. Soon, he realized that the other characters beyond Picard could also be mined for comedy, and a Riker Tips account was the logical next step.

“I started tweeting stuff that was very silly, and kinda making fun of Riker, and very sexual and goofy, and not respecting him as a strategic expert, but just being like, ‘He’s a horn-dog,'” he later detailed in a podcast. “If you want expertise, go to Picard, but if you want something funny go to Riker, because that’s the current perceived ethos about those two characters today. It’s not true, it’s not fair, but it’s funny.”

One day while working from home, he got the idea while accidentally Googling something NSFW on his company’s VPN, which led to the following Riker Tip:

“And then I was like, this is a setup with like 10,000 punchlines,” he continued. And that’s how Riker Googling was born.

Even as the Star Trek franchise continues to grow and evolve (currently in the second season of Star Trek: Discovery, with two new reboot films reported to be in development at Paramount), it seems highly unlikely that any offering will eclipse the meme-ability of Next Generation in all its cheesy but compelling late ’80s-early ’90s glory.

As Commander Riker himself would go on to say, quoting the legendary Zefram Cochrane: “Don’t try to be a great man, just be a man and let history make its own judgments.” Or memes, in this case.