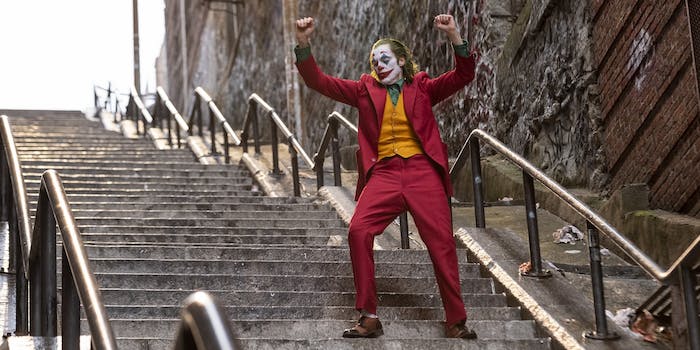 ‘Joker 2’ is happening whether you like it or not

The original 'Joker' director Todd Phillips has reportedly signed on for a sequel.

Does the movie Joker need a sequel? Narratively speaking, probably not. But according to Warner Bros. the answer is a resounding yes, because the first movie made a ton of money. So Joker 2 is now reportedly in the works, with the original director/co-writer Todd Phillips returning to co-write a new screenplay.

While Joker did feel like a standalone movie, there was always buzz around the idea of a sequel. This is a comic book franchise, after all. Back in 2020 there were unverified reports of Joaquin Phoenix being offered $50 million for two sequels (a hefty paycheck for a guy who usually makes indie dramas), and Phoenix already seemed open to reprising the role.

Speaking to the L.A. Times in 2019, Phoenix made it clear that he wasn’t interested in being locked into a multi-film contract “that doesn’t motivate you or excite you.” But filming Joker apparently did motivate and excite him, because he asked Phillips to start working on a sequel after they finished filming. Apparently, there was “way too much to explore” with the character.

Whenever we hear about a seemingly one-off movie getting a sequel, it invites questions about whether the creators can capture the same magic twice in a row. And with Joker those questions are more specific than usual.

The original film was an extremely direct homage to two Martin Scorsese movies from the 1970s and ’80s, Taxi Driver and The King of Comedy. It even cast Scorsese’s longtime collaborator Robert De Niro in Jerry Lewis’ King of Comedy role. So when Phillips writes the sequel, will he copy more classic films from this gritty period in American cinema? Or will he go a more original route for the Joker’s next story?