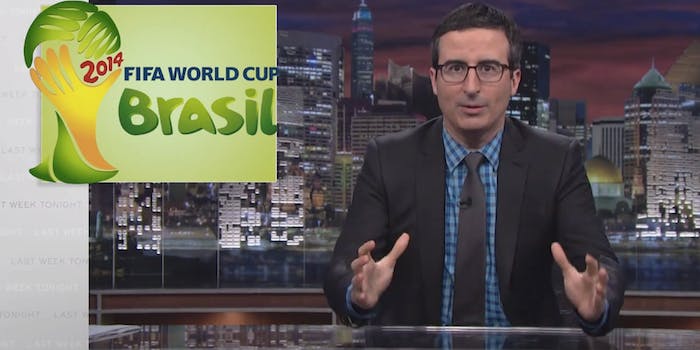 John Oliver eviscerates the FIFA World Cup in one segment

Even if you don't follow soccer, this is a must-watch.

Rather than merely play indignant whistleblower, Oliver put a bow on the segment by basking in his own self-loathing consumerism and hopeless dedication to FIFA’s events. He called it the sausage principle: “If you love something, never find out how it’s made.”

Attacking everything from human rights violations and bribery to government spending, tax-exemptions, and absurd FIFA propaganda films starring Tim Roth, Oliver unhinged the most biting jokes of his nascent series.

“[Soccer is] an organized religion and FIFA is its church,” Oliver said. “Its leader is infallible; it compels South American countries to spend money they don’t have on opulent cathedrals, and it may ultimately be responsible for the deaths of shocking numbers of people in the Middle East.”

He didn’t hold back.

“One can be horrified or relieved that FIFA wasn’t also sponsored by cocaine and chainsaws.”

On the $250 million FIFA will forgo in Brazilian taxes, and the $270 million it forced Brazil to spend on a stadium in Manaus that will be used for four games in a city that doesn’t have a professional team:

“Think of money as pubic hair and FIFA as wax … They’ll be all over you during the World Cup but when they go they’re taking all the money with them.”

On general executive corruption–including bribery scandals from Qatar officials to award the Middle Eastern nation the 2022 World Cup–after a clip asserted that “bribery and FIFA go together like peanut butter and jelly.”

“[Bribery and FIFA] should go together like peanut butter and a child with a deadly nut allergy.”

“A reserve of a billion dollars? When your rainy day fund is so big you’ve got to check it for swimming cartoon ducks, you might not be a not-profit anymore.”

On United Passions, a film about the creation of FIFA starring Tim Roth as FIFA chair Sepp Blatter, that is basically a propaganda pet project.

“Who makes a sports film where the heroes are the executives?”

On reports that estimate over 4,000 migrant laborers from India and Nepal will die in Qatar building the infrastructure for the 2022 World Cup.

“This is shaping up to be the most deadly Middle Eastern construction project since this one.”

But through it all, Oliver, like every conflicted, halfway-aware soccer fan, can’t look away.

“I am still so excited about the World Cup next week.”