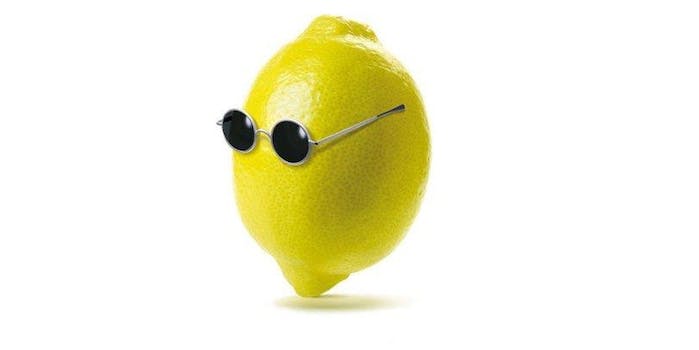 John Lemon sparks the first meme war of the year.

Ten years ago, a YouTube video asked us to “imagine” what it would be like if John Lennon had been a talking piece of citrus fruit. John Lemon was born. Soon he would be transformed, become elevated to meme status at age 4, and die of natural causes (people got tired of him). Now he’s back from the dead, and possibly bigger than ever.

A brief John Lemon history lesson, courtesy of Know Your Meme: In 2011, the height of Bieber Fever, a Justin Bieber fan asserted on Tumblr that “Justin Bieber is better than John Lemon. Suck my dick.”

The statement was apparently an intentional typo, a case of “keming,” or a misunderstanding by a young person unfamiliar with the Beatles. Either way, it was mocked hard. That’s when the canonical image of John Lemon came into being: 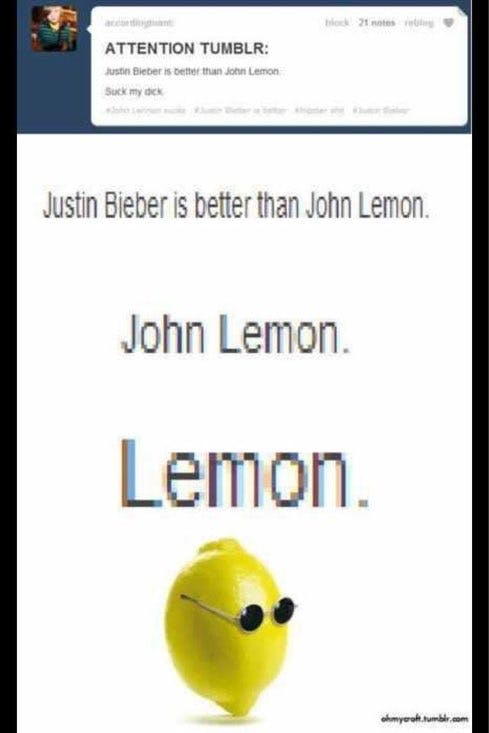 There he is: a lemon with round hippie sunglasses. It wasn’t really much of a meme, but it did pop up whenever someone made the same blunder of confusing lemon and Lennon.

But on the first day of 2017, John Lemon rose from the dead. On Reddit‘s r/dankmemes, a user called eternallysexual submitted the lemon, facing in the other direction, under the headline “New Year New Meme”: 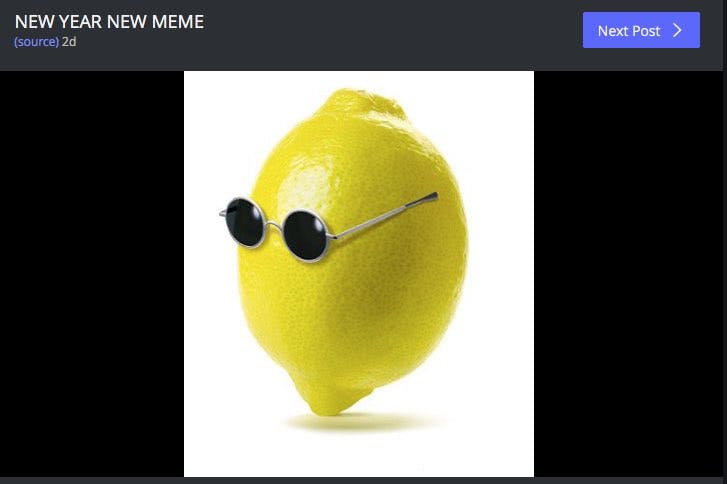 This is what’s known as “forcing a meme,” declaring that something is already a meme before it catches on organically, hoping what you’re saying will become a self-fulfilling prophecy. In this case, it was probably a joke, considering that John Lemon was an old, dead meme without much creative potential beyond the original pun.

But lo and behold, the meme has been successfully forced, and John Lemon walks the internet once more. Well, not walks. He doesn’t have legs. But you know what I mean.

Lemon is already starting to see remixes and combinations with other, more recent memes, such as the glowing 1000-degree knife:

Or this stock photo dweeb: 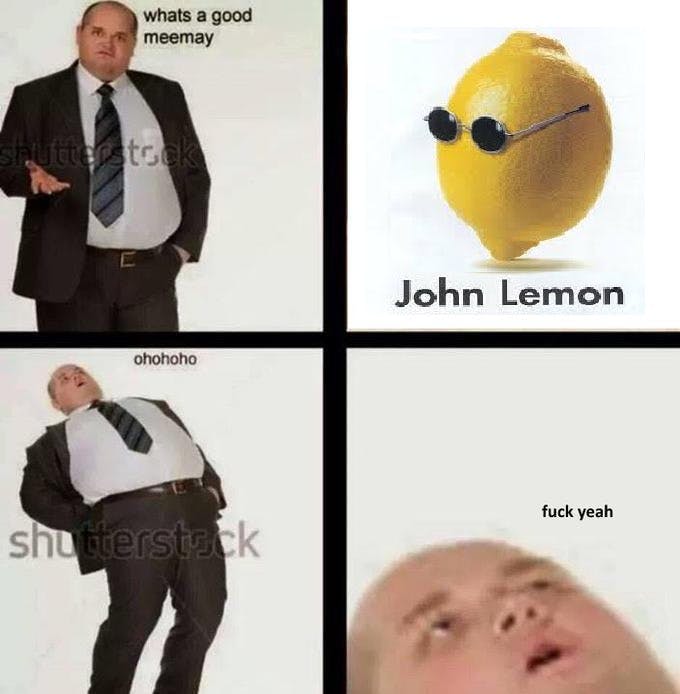 And some people are also trying to push the pun angle further:

According to speculators on Reddit’s r/MemeEconomy, John Lemon’s stock is rising.

But others don’t accept John Lemon as a real meme, arguing that he’s not dank—which is to say, not fresh or potent: 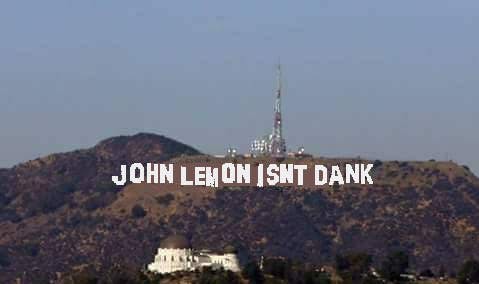 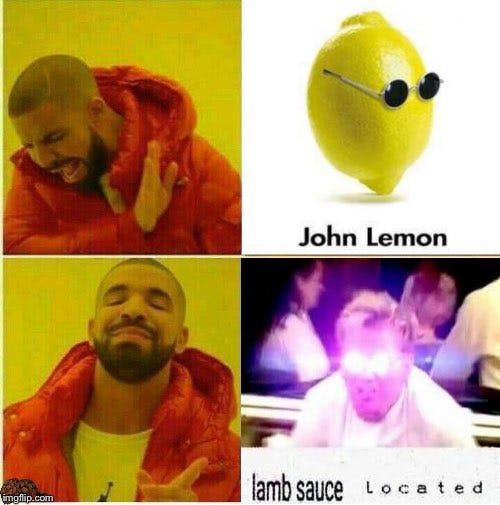 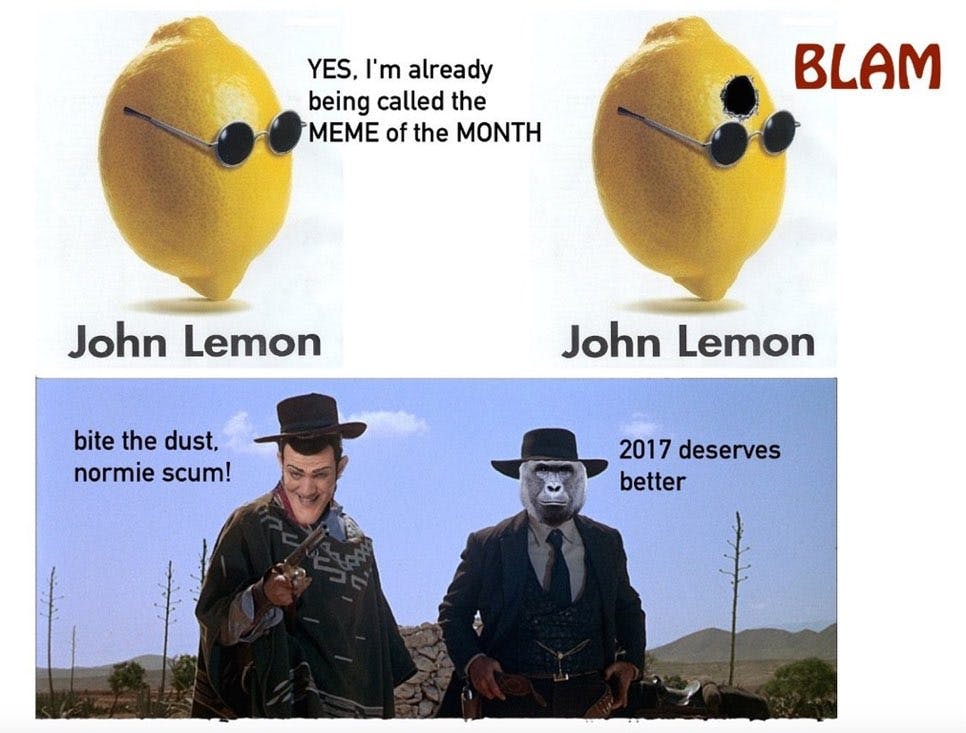 In fact, anti-Lemon posts, decrying the character as “normie shit” and not worthy of the “meme of the month” title, are much more popular on r/dankmemes than sincere posts praising the lemon.

According to one poster on MemeEconomy, Lemon is just the latest in a line of forced New Year’s Day memes, most of which were horrible failures:

Every year around new years day, dozens of memes are created and forced with the intention of becoming “the first meme of 20XX”. I remember this phenomenon happening last year with the “Zozzle” meme, which was forced too hard and has now faded into obscurity. “John Lemon” memes will almost definitely be forgotten in the following few days. Last year I made the mistake of hoarding Blobo, Zozzle, FrailSnail and Kanjiklub memes, to the point of even creating subreddits for them and making fresh new OC. I was convinced that they would take off, but they never did, wasting my time and leaving me with poor upvote yields. Stay safe this January and invest carefully.

This pushback against the forced meme is only bringing it more attention, though, playing out a very old meta-meme dynamic that goes back to mid-2000s 4chan and “Milhouse is not a meme.”

Milhouse, the Simpsons character, was not a meme, but “Milhouse is not a meme” was. Sounds an awful lot like the most popular John Lemon meme of the moment: “John Lemon is not dank.”

An overarching meme war for 2017 is beginning to take shape in just the first week, pitting a kind of retro meme literalism against the multi-layered irony that has defined dankness over the past couple of years. John Lemon, risen from his grave for about three days, was the first casualty.