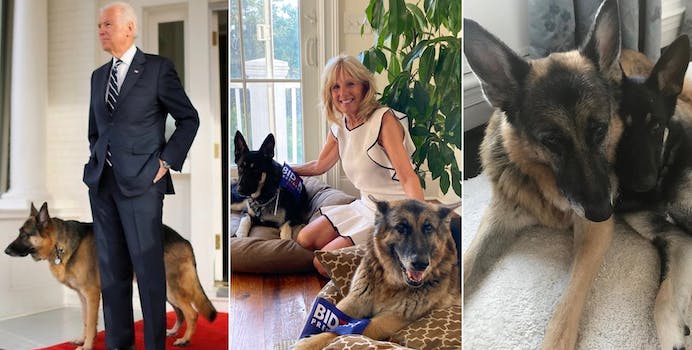 Millions of Americans were elated to learn that President-elect Joe Biden was projected as the winner of the 2020 election and will be entering the White House come January. But they’re arguably even more ecstatic over the guests he’s bringing with him: his newly Twitter-famous dogs, Champ and Major.

Following a dog-free four years under the Trump administration, Biden’s two German shepherds will accompany him at the White House. Champ, the elder shepherd, already spent time at the White House during Biden’s tenure as vice president, but it will mark Major’s first time there. Major will also make history as the first rescue dog to live on the property, NBC News reports.

The president-elect’s two Very Good Boys made their highly publicized Twitter debut on Sunday with the @First_Dogs_USA account.

“Hello America! Hello world! It’s us, Champ and Major,” @First_Dogs_USA wrote in a tweet that has now been retweeted nearly 9,000 times. “We are the Bidens’ family puppers and First Dogs Elect(s) of USA. We want to thank you all for your suppawrt by sharing our pawsidential adventures here! Woof! Woof!”

Champ and Major have already earned well over 100,000 Twitter followers and earned endorsements from highly influential Twitter accounts such as WeRateDogs, who granted the First Dogs-elect a coveted 14/10 rating.

Champ and Major’s mentions are flooded with praise and congratulations from Biden supporters and pet owners who are delighted to see some four-legged representation back in the White House.

Some Twitter users found themselves defenseless against Champ and Major’s cuteness despite their best efforts to resist.

“Repeating to myself ‘I am not Immune to Propaganda’ while looking at Biden’s dog Major the first rescued dog in the white house,” @easybriizydraws tweeted.

@Eevachu also succumbed to the Bidens’ “neoliberal dog propaganda” and declared that the First Dogs-elect were, in fact, good boys.

Others were wary of the prospect of two German shepherds in the White House.

Indeed, Champ and Major will likely be doing plenty of sniffing at the White House. And licking. And fetching. And maybe even some rolling over. Here’s hoping Champ and Major can rehabilitate German shepherds’ reputation as Biden restores the soul of a fractured nation.