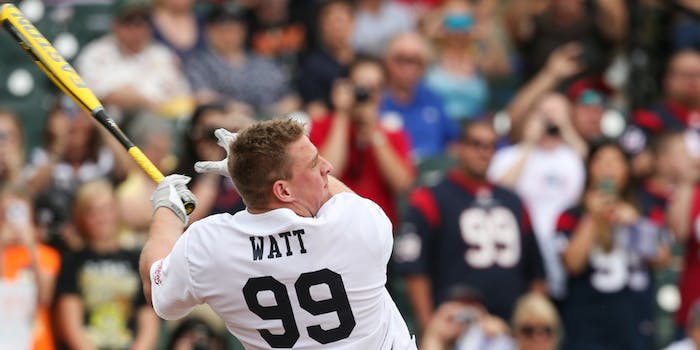 J.J. Watt will write a letter to the boss to get you off work

We already know Houston Texans defensive end J.J. Watt is a big-time NBA fan. He’s also a fan of 12-year-old kids who can sing the hell out of a national anthem, and he enjoys dancing after the Houston Rockets win a playoff game.

But here’s what we didn’t know before Monday night. If you need an excuse to get out of work, Watt is perfectly willing to write your boss to ask if you can have the night off.

Apparently, Ashlee Sanchez is a big-time Watt fan, though since Watt answered her, she’s protected her tweets (perhaps it’s because it appears that this job might be a new one for her). The reason Watt answered her in the first place is that Sanchez was day-dreaming about Watt writing a letter to help her get out of work so she can watch the J.J. Watt Charity Classic in Sugarland, Texas, on Friday. Since Sanchez—who apparently hails from Brownsville, Texas, which is about 330 miles from Sugarland—tagged Watt in her original tweet, Watt noticed the request.

But now that Watt has obliged her, it appears as if Sanchez is having second thoughts.

Either way, Watt’s letter and tweet were well done. Especially the neat hand-writing, the impeccable grammar, and the classy personalized stationary.

Who knows if it’ll work and if Ashlee’s boss will let her bail for a night, but either way, props to Watt for taking the time to write out a note just like the best parent you could ever wish to have.