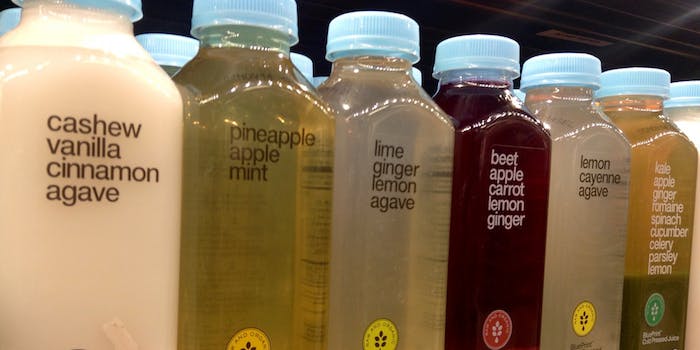 This is a pretty sweet spoof.

“Cold-pressed” juice is apparently a thing, with health nuts paying upwards of $8 a bottle for the stuff in an effort to “reset” their bodies, whatever the heck that means.

Jimmy Kimmel decided to have some fun with this trend. After all, what are late-night variety shows for if not mocking the latest fad?

Kimmel made up his own line of juice, dubbed “juce,” and produced its debut flavor (“Soul”) with the finest and healthiest ingredients he could find: Fun Dip and water. He also created “Cure,” which was nothing but Tang powdered juice; “Rainbow,” a.k.a. Skittles blended together; and “Detox,” which was just melted popsicles.

Juce debuted at a farmer’s market, where the cameras of Jimmy Kimmel Live were on hand to watch health food nuts taste-test it.

“I would drink it regularly,” said another. “It tastes good and it’s not real sugary like a lot of juices are now.”

The spirit of entrepreneurship is alive in America.