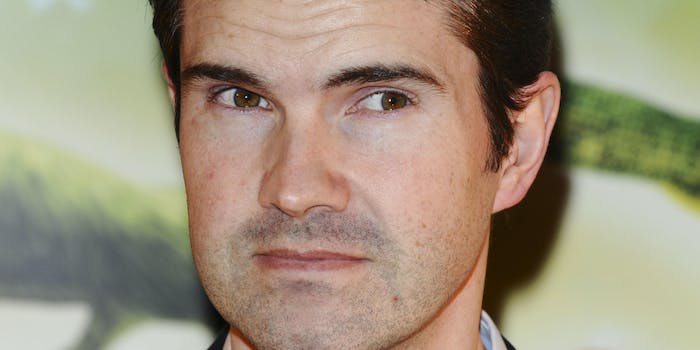 Carr joked that the deaths of Roma people was a 'positive' result of the Holocaust.

Jimmy Carr is a household name in the U.K., a stand-up comic who often uses dark and edgy humor but is mainstream enough to be a staple guest on TV panel shows. Mirroring the controversy around Dave Chappelle, he’s now at the epicenter of a massive backlash against his latest Netflix special.

Carr’s stand-up show His Dark Material came out in December but gained traction this week thanks to a viral clip of him delivering a Holocaust joke. The joke frames the death of Roma people as a “positive” result of the Holocaust, echoing widespread racism against Roma and Traveler communities across the U.K. and Europe.

“When people talk about the Holocaust, they talk about the tragedy and horror of six million Jewish lives being lost to the Nazi war machine,” says Carr in the clip. “But they never mention the thousands of gypsies that were killed by the Nazis. No one ever talks about that because no one wants to talk about the positives.” This punchline is met by a wave of laughter from the audience.

After going viral this weekend, this joke was harshly criticized by numerous public figures, prompting a public response from Friends, Families and Travellers, a charity working with the GRT (Gypsy, Roma and Traveller) communities.

“We are disgusted and outraged to see Jimmy Carr celebrate and trivialize the Roma Holocaust in which over 500,000 Roma and Sinti people were killed, subject to torture and medical experimentation,” reads the statement. The charity also called upon Netflix and Channel 4 to review their working relationships with Carr—and for Netflix to remove his stand-up special. (Carr currently hosts the popular Channel 4 comedy show 8 out of 10 Cats.)

The backlash against Carr’s joke is so extensive that the prime minister’s spokesperson released a statement of condemnation, with several other prominent politicians following suit. But considering the Conservative government’s own history with anti-GRT policies, there’s an air of hypocrisy here.

A recent poll characterized Roma and Irish Traveller people as the “least liked” communities in the U.K., facing unmatched levels of hostility and discrimination. This has a foundation in centuries of racism and anti-GRT legislation, with the current government overtly cracking down on GRT communities, attempting to criminalize their traditional ways of life.

Jimmy Carr’s Holocaust joke is now a national talking point in the U.K., but it feels telling that it took six weeks to get here. The Netflix special came out on Dec. 25, and there was no backlash at the time. Carr’s Netflix audience clearly didn’t see the joke as a problem.

Anti-GRT rhetoric is normalized within British political discourse, and Roma people are invariably stereotyped and whitewashed in pop culture. In that context, Carr’s Holocaust joke was initially deemed acceptable by its target audience. And Netflix had no problems airing the special. The only reason anyone is talking about it now is thanks to Romani businessman Alfie Best, who shared a secondhand TikTok clip on Facebook, commenting that Carr’s joke “shows the world the abundance of abuse we take as gypsy people.”

So far, Carr’s only response to the controversy was during a stand-up show this weekend, joking about cancel culture and saying, “I am going to get canceled, that’s the bad news. The good news is I am going down swinging.”

The Daily Dot has reached out to Netflix for comment via email.