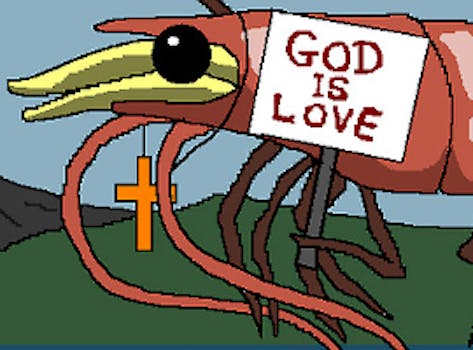 Jim’ll Paint It makes good on his promise

Robocop, Bill Murray, and more than a few offbeat Britishisms have made this MS Paint Tumblr a total hit.

He’s been around for less than two weeks, but already he feels like a cultural phenomenon: Since his arrival to the Internet on Feb. 26, Jim of Jim’ll Paint It has garnered a steady stream of Tumblr followers and over 40,000 likes on Facebook–all from one simple promise.

The best thing about the talented scribbler’s drawings of absolutely anything and everything is that the requests are often as entertaining as the artwork. Take, for example, his most recent offering:

Robocop at the checkout in Tesco, trying to decide if its worth 10p for a bag for life. He has bought a shitload of Soreen so he’s going to need something sturdy.

The appeal lies not just in the incongruity of Robocop at the Tesco surrounded by citrus, but in the existential conundrum he faces, so familiar to all of us and yet universally profound: Does he want to buy the sturdy bag? Is he ready to commit? Is it worth 10 pence? Will he be able to remember to cart the bag with him, or will he be forever drifting through life, buoyed between a sea of endless paper or plastic? What should he choose? 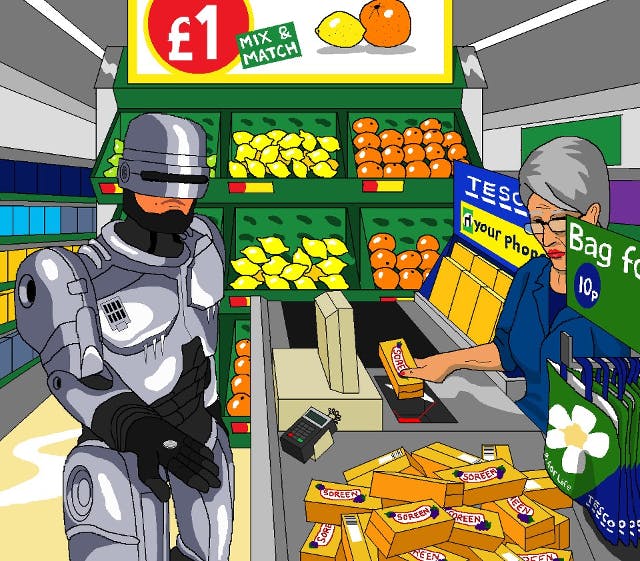 The instant community around Jim’ll Paint It, along with the requests for what to paint, has already grown so large that yesterday he left the choice of what to paint next up to his followers; Robocop received 1,900 votes.

Jim’ll Paint It seems to have a British bent, with a title inspired by the long-running British series Jim’ll Fix It (starring posthumously disgraced celebrity pedophile Jimmy Savile). The requests often require an index of who’s who in British pop culture to properly parse, as well, but the endearing artwork—impressively detailed and painstaking for all its crude MS Paint origins—carries a universal appeal.

If you’ve missed his Tumblr and Facebook so far, here are some of the highlights:

Please paint me the Stay Puft marshmallow man losing a game of mousetrap with Hugh Fearnley-Whittingstall (who happens to be on fire) while Face from The A Team arrives on a pigeon dressed in leopard print Y-fronts and wedding veil, all this is taking place on the moon. 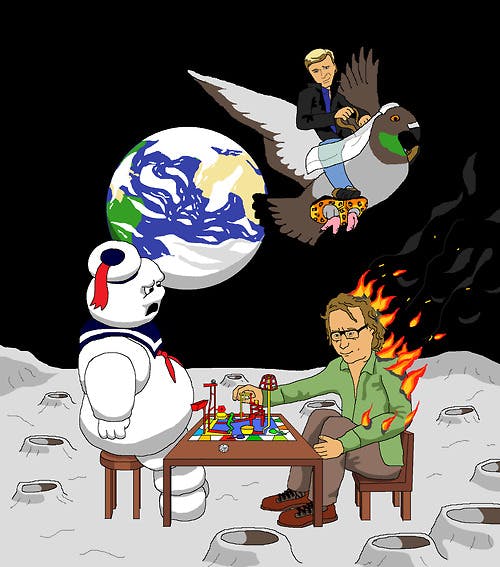 Please paint me a bat in a leotard being distracted by a violin sticking out of a rainbow coloured bottle bank next to a three legged toffee crisp holding a mushroom and half a wasp. In the background is a turtle having a tennis lesson, and an upside down Taj Mahal covered in ears. 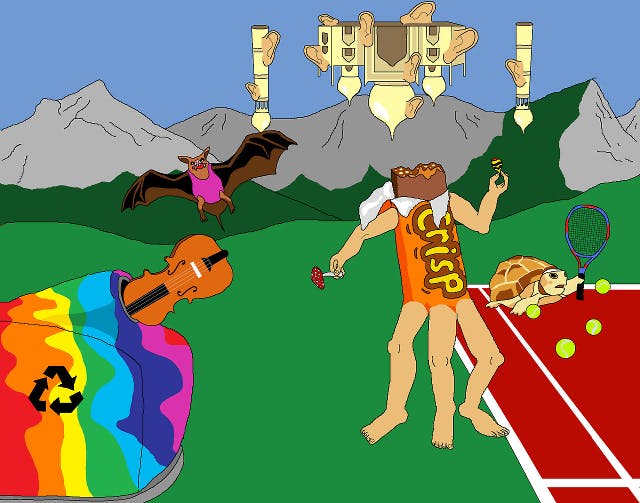 Please paint me Rene from Allo Allo sat next to Bebop from Teenage Mutant Ninja Turtles on the face of comatose giant Dean Gaffney (felled by two entire bottles of Disarrano [sic]) each glumfully eating spoonfuls of Brasso as they watch a live Sky news story detailing the death of Nikki Sixx from Mötley Crüe? The background should be very reminiscent of the opening credits of Saved By The Bell, and Rene should be wearing a t shirt that indicates that he likes Camembert. 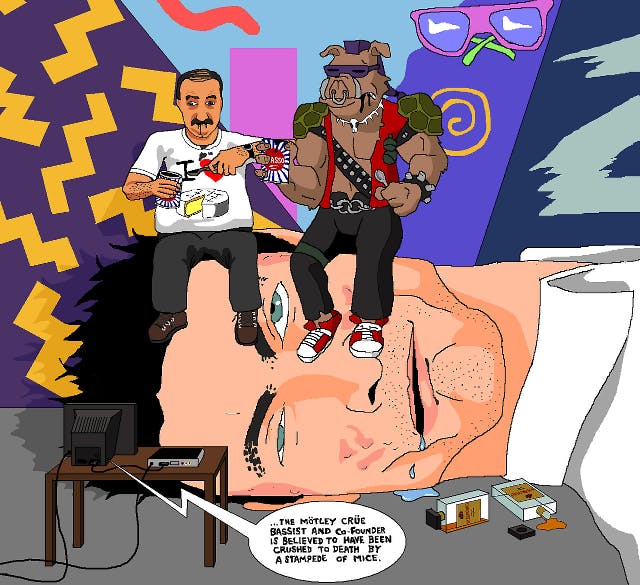 Please paint me Bill Murray catching a bank robber using only his charm while members of the Tokyo police force shield themselves behind him? 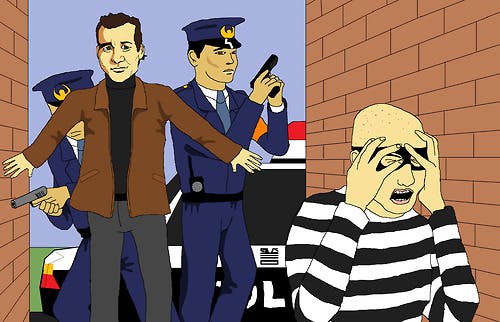 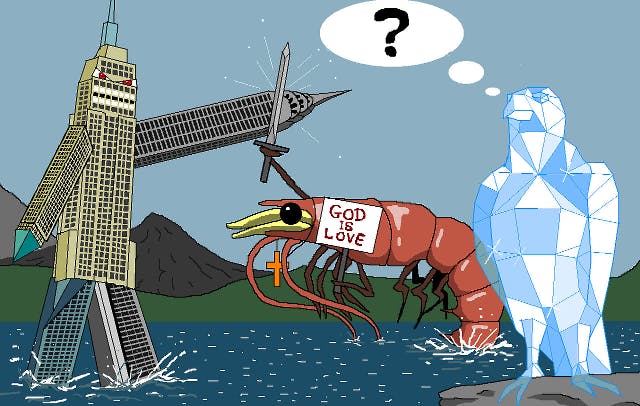 Please paint me a scene where Jesus bursts into Hitler’s bunker smoking a cigar and riding a T-Rex, while firing a Thompson machine gun with one hand and holding sticks of dynamite with the other, robes flowing, winking and smiling. And at the same time the BTTF2 DeLorean has crashed into the bunker wall with Ash from Evil Dead II out the car shotgunning and chainsawing Nazis who speak in Commando comic German (Gott in himmel [sic] etc) and chopping through Nazi Xenomorphs from the Alien movie franchise. 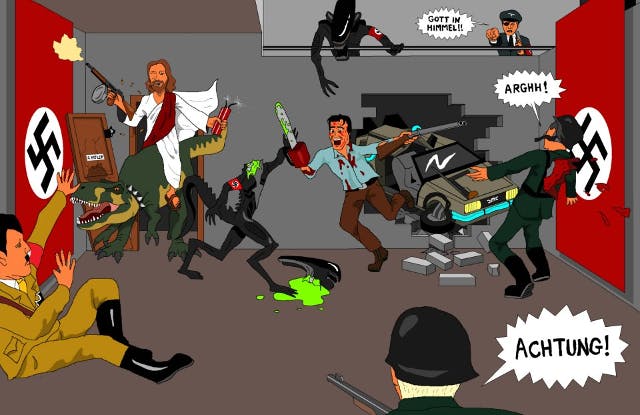 The requests that have gone unpainted are golden, too. Already, the Robocop/Tesco universe is expanding:

Dear Jim, please paint Saxton Hale wielding a lighting-enveloped sword and Spas-12 shotgun riding a blue flamingo through the gates of Heaven, which is on fire, while astronauts on shining podiums play electric guitars on either side of him. Below the clouds supporting Heaven, atop a Zeppelin, Wolverine duels Jedi Master Yoda while reciting lines from The Spongebob Squarepants Movie. Everyone in the picture is smoking three cigarettes, including the flamingo. And a monster truck containing Robocop and his Soreen supply is driving over the Zeppelin about to run Yoda over.

And the existentialist approach is proving popular:

Dear Jim. I would be delighted if you could be so kind as to paint me the image of Chris Eubank attempting to teach Tom Selleck how to ride a unicycle down Blackpool‘s historic Golden Mile. Terry Waite should be chained to a carelessly discarded radiator nearby and a miniature Gordon Ramsay, dressed in nothing but a bra and cycling shorts, should be shouting obscenities in the general direction of a gaggle of confused geese. The background should be one of a brooding sky, full [of] foreboding.

Some requests simply sell themselves:

A delightful portrait of Nicolas Cage sat atop the Eiffel Tower, high-fiving Jesus.

For now, the United Kingdom continues to rule the cultural aspects of Jim’s ever-growing universe. But at the rate at which the paint master is expanding his audience, the Yanks are surely coming.

Meanwhile, we can continue to enjoy the rare cultural hybrid, like this instant classic:

Please paint me Moby throwing ninja stars at a melancholic badger whilst eating a Papa John’s Pizza in Lidl in Shrewsbury. Moby is wearing an Admiral England shirt, Bermuda shorts and 18-hole DMs. The badger is sat in Spielberg’s [director’s] chair and smoking a pipe. 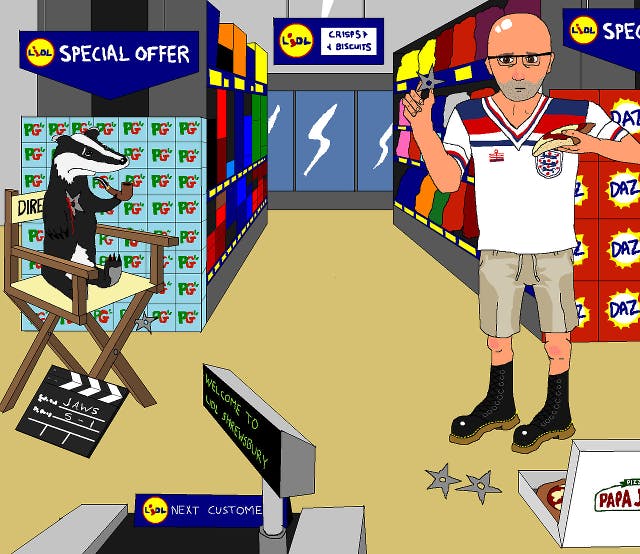