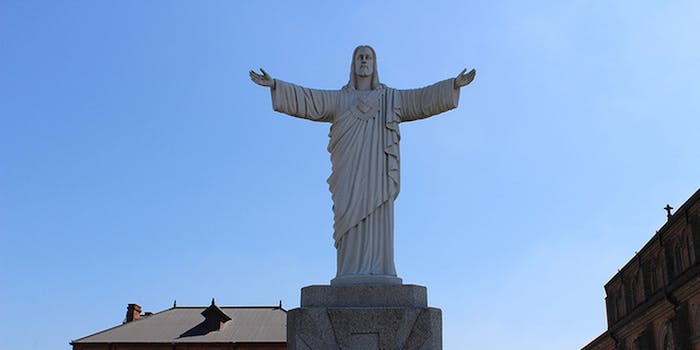 Teens. They’re petitioning for their yearbook photos to include a cat. They’re creating video games to educate about periods. And they’re potentially facing two years for face-banging a Jesus statue.

In late July, one 14-year-old male from Everett, Penn., whose name has not been released, allegedly posted photos to Facebook showing him simulating a sexual act on a Jesus statue in front of the Love in the Name of Christ organization in Everett. And because what’s posted to Facebook never stays on Facebook, the teen is now facing criminal charges for “desecration of a venerated object.”

You might be thinking that charge sounds awfully antiquated, and you’d be right: The law was allegedly enacted in 1972. The act of “desecration,” as defined here, entails “defacing, damaging, polluting or otherwise physically mistreating in a way that the actor knows will outrage the sensibilities of persons likely to observe or discover the action.” This same law was used in a 2010 case, in which a college student was arrested for urinating on a nativity scene.

But, technically, the teen didn’t deface or damage the statue, so is outrage a crime here? Was he intending to provoke outrage? Likely not. He’s 14, and thought it would be funny to put a photo of Jesus blowing him on Facebook. Love in the Name of Christ decided not to press charges, and told Raw Story they’re praying for the young man.

Arguments as to the constitutionality of this 40-year-old law have been abundant on social media in the days since the story broke.

So you’re going to arrest a teenager who took a picture of a Jesus statue giving him a BJ but #DarrenWilson is still walking around free?

No word yet on whether the statue of Satan with a boner that recently appeared in Vancouver is related.