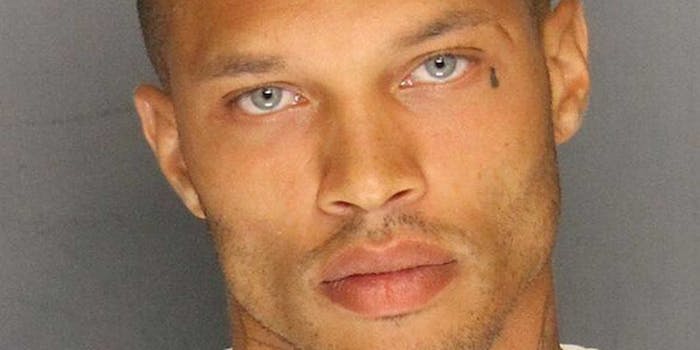 Jeremy Meeks has been the most popular man on the Internet for the past 24 hours.

After being arrested and charged with “street terrorism” in California on Wednesday, the Stockton Police Department posted a mugshot of the 30-year-old on its Facebook page. The photo quickly went viral; it has been met with more than 70,000 Likes and thousands of fawning comments, many from females, the likes of which would make even a cold-blooded criminal blush.

And, well, “street terrorism” sounds pretty damn cold-blooded. But rest assured, Meeks wasn’t trying to blow up any buildings or anything we may commonly associate with “terrorism” nowadays.

The term “street terrorism” basically refers to gang activity, and it dates back to a 1988 law passed by the California state government called the Street Terrorism Enforcement and Prevention (STEP) Act.

At the time, the state legislature felt that California was in “a state of crisis which has been caused by violent street gangs whose members threaten, terrorize, and commit a multitude of crimes against the peaceful citizens of their neighborhoods.”

The law was an attempt to discourage gang activity by not only making it illegal to be part of a street gang, which is broadly defined under the law, but also by enhancing prison sentences for any regular crimes that law enforcement felt had gang connections.

The original law has been amended several times over the years, but essentially law enforcement can tack on up to 25 years to the sentences of criminals with gang associations, according to information from the Orange County District Attorney’s webpage. And yes, that’s in addition to the normal sentence for the crime.

The STEP Act is not without critics. A 2009 article in the Southern California Interdisciplinary Law Journal described the law as both “unjust and ineffective,” arguing that the enhanced sentences are overly harsh and disproportionately applied to racial and ethnic minority groups.

The majorly handsome Meeks was brought in on felony weapons charges. Since the weapons charge was not connected to a robbery or other violent crime, Meeks would likely face an enhanced sentence of less than 10 years and as few as two years.

“This is really not me,” Meeks said, seemingly unable to hold back a smile. “I’m not some kingpin.”

Officer Joseph Silva, a spokesman for the Stockton Police Department, painted a very different picture of Meeks. Silva told the Associated Press that Meeks is “one of the most violent criminals in the Stockton area.”

Of course, it will be up to a jury and judge to determine whether or not Meeks is deserving of gang-related charges. Meeks is scheduled to be arraigned on Friday.

You’ll find footage from the jailhouse interview with Meeks in the video below.