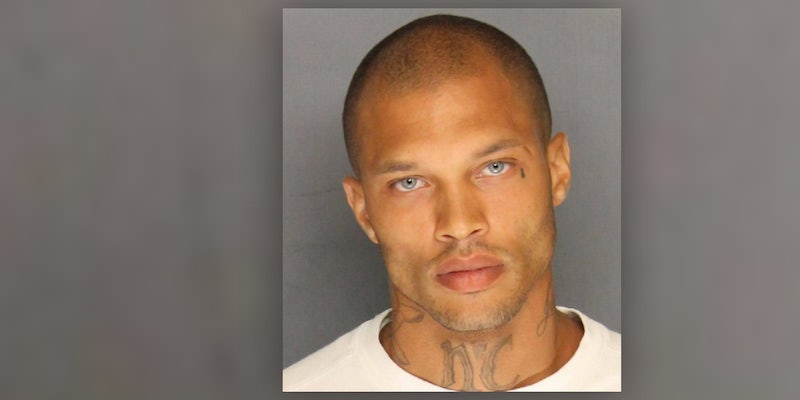 He’s flattered, but wants people to know he’s “not some kingpin.”

Yesterday, the Internet turned into the collective cast of a non-existent Lifetime movie called My Handsome Felon. The mugshot of one Jeremy Meeks, who was arrested by Stockton police for gang activity and had previously spent nine years in prison, was the cause of this swooning. The heat from his mug turned us all into human puddles with emoji heart eyes.

Is this sexualization of a criminal a weird phenomenon? Yes, but remember we also turned Hammock Bear into an Internet celebrity. In a jailhouse interview with Sacramento’s News 10, the “world’s hottest felon” addressed his sudden fandom, and said that while he’s flattered, he wants people to know this really isn’t him, and he’s “not some kingpin.”

You know what’s even better than Meeks’s interview? The newscaster reading the Facebook comments on the Stockton police’s page, including “I’d go 50 Shades on that man!!!! Oh god YES!” He then goes on to express his disgust over how we’re putting Meeks on a pedestal, and takes his photo out on the street  to ask other women what they think. (Spoiler: They’re not into it.)