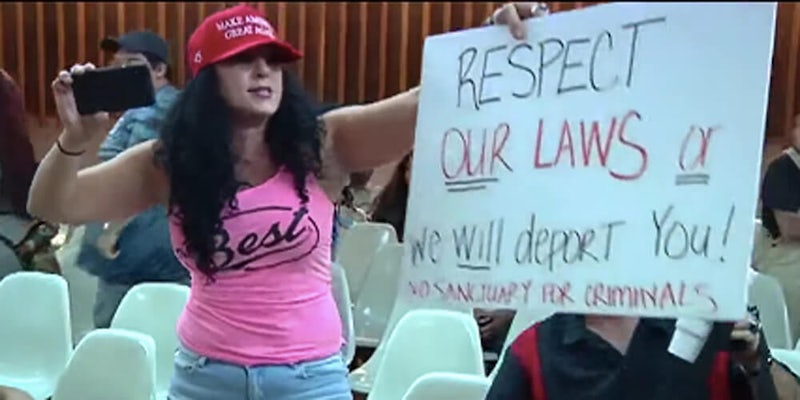 She was allegedly stealing hotel points from an elderly person.

When #GreenShirtGuy went viral for laughing his ass off over some MAGA-hat wearing woman’s rant against immigration, it was a total mood. And now, months later, we’re all laughing at her all over again.

Jennifer Harrison, who last made headlines for harassing churches that were providing aid to immigrants, was arrested on Oct. 24 for identity theft. Specifically, she has been accused of stealing hotel points from an elderly lady so she could go to the Aftershock Festival and complain about California.

It’s unknown at the time what her relationship with the woman she pretended to be in order to steal the hotel points is, if there is any relationship at all, but it was “done without the knowledge and permission of the victim, who is willing to aid in prosecution,” according to court documents.

The real kicker here is that the charge of taking the identity of another is a Class 4 felony–and one that is often slapped on undocumented immigrants who borrow or make up an identity in order to get a job. But unlike immigrants who are trying to make better lives for themselves, Harrison had the moral high ground of desperately needing those points so she could rock out to Blink 182.

The court docs say Harrison failed to cooperate when she was brought in, kicked over a trash can, and spewed profanity all over the place.

“Jennifer created a scene at the PD (police department) and in the book room because she believes she is above the law and does not want to be treated like a criminal,” the report reads.

Harrison posted on Facebook the day after her arrest, claiming there is a “witch-hunt against me” and “piranhas are circling for blood.”

When asked for a comment by the Arizona Republic, Harrison responded, “My attorney said no comment but you should wait until the truth comes out before you write a story.”

Fortunately, we’ve already got the only comment we need from anybody–#GreenShirtGuy himself.

“THIS IS NOT A JOKE BUT IM STILL [LAUGHING],” Alex Kack tweeted.

THIS IS NOT A JOKE BUT IM STILL LAIGHING: AZ Patriots leader Jennifer Harrison arrested on suspicion of identity theft https://t.co/xd8vkZDXZX via @azcentral