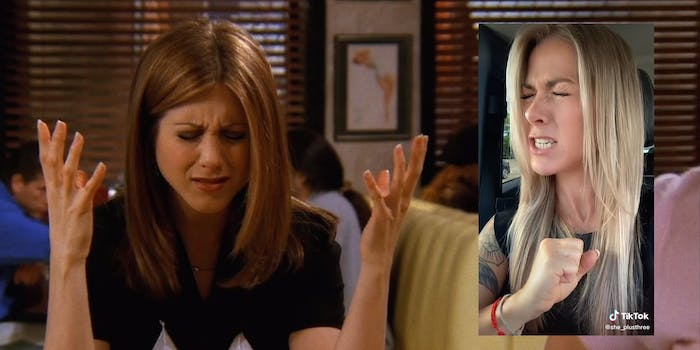 This TikToker is a dead ringer for Jennifer Aniston

There are plenty of celebrity doppelgängers all over TikTok, but one woman who looks just like Jennifer Aniston might just take the cake.

Lisa Tranel, who posts on TikTok as @she_plusthree, doesn’t always embrace the aspects of her celebrity lookalike in her videos. Most of her videos involve lip-syncing to dialogue or dancing, but she does acknowledge her resemblance to Aniston: Her TikTok bio simply reads, “Not Jennifer Aniston 😂.”

But in her latest video, that changed. Tranel, who’s sitting in a car, lip-syncs along to a bit of dialogue from the season 3 Friends episode “The One Where Chandler Can’t Remember Which Sister.” Tranel, naturally is stepping into the role of Rachel Green, aka the character Aniston played on the series, who is contemplating quitting her terrible job at Fortunata Fashions.

“Oh, I wanna quit, but then I think I should stick it out,” Rachel says, which Tranel replicates in the lip-sync video. “Then I think, why would such a person stay in such a demeaning job just because it’s remotely related to the field they’re interested in?”

It’s not just her looks that really sells it, it’s also how she conveys the mix of emotions Rachel is feeling in that particular scene.

“I actually thought it was Jennifer Anniston,” one person commented. “Wow!!”

Another person suggested tagging the real Aniston, to which Tranel replied “I’m 100% down with that!”

Celebrity doppelgängers are seemingly everywhere on TikTok. Many of those videos are set to the song “Back Up (feat. Big Sean)” by DeJ Loaf. The videos are usually marked by comments about how much they look like a particular celebrity before the person turns around to reveal their face. (Per The Atlantic, some of those videos incorporate the use of a special effect in the TikTok app called “Face Tracking.”

But if Aniston was to respond to Tranel’s TikTok video, it wouldn’t be the first time for a celebrity to engage with one of their doppelgängers. Within the past year, TikToker @poliakov71 posted a video that showcased how much she looked like Rihanna, prompting the real Rihanna to comment, “where the album sis?”