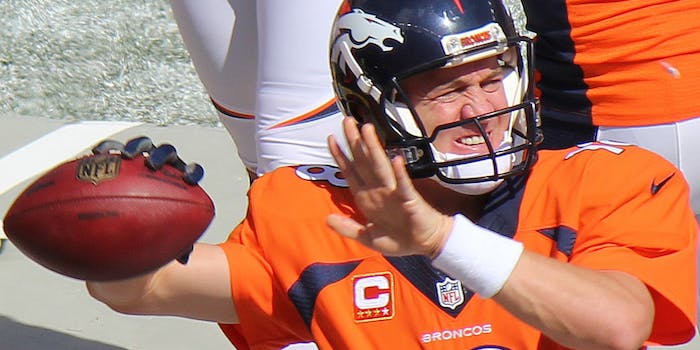 Peyton Manning passed Brett Favre as the NFL’s all-time leader in passing touchdowns Sunday. He now has 510 TDs to Favre’s 508. Jenn Sterger used the moment on Twitter to stick in a zinger at Favre’s expense.

Hey Peyton, if that congratulatory text from “He who shall not be named” is an MMS… Prolly best to just delete that one.

You probably remember Sterger from this time four years ago. The former Florida State student turned sideline reporter was a massively popular, topical Halloween costume—a girl, a dude in a Favre jersey, and some sort of penis illustration.

These days Sterger is a New York City-based blogger, comedian, actress, and model. But she’s best remembered for bravely exposing the iconic quarterback as a sexually harassing office scoundrel back in 2010. In 2008, both worked for the New York Jets, and Sterger reportedly turned down repeated Favre advances. We know this because she hung onto the voicemails. He also, allegedly, sent a dick pic. He still denies that one.

Photo via Jeffrey Beall/Flickr (CC BY 2.0)