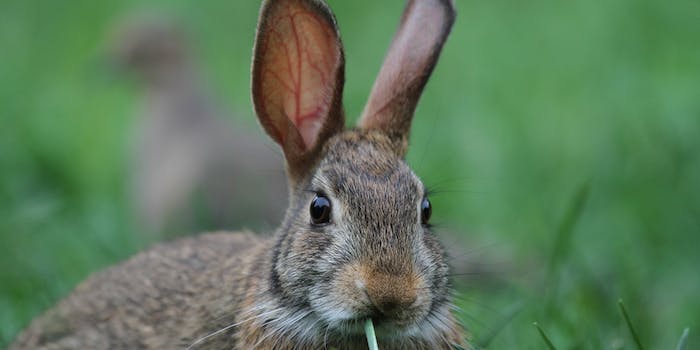 "Rabbit ate my parsley. I am eating the rabbit."

Warning: This article contains graphic images and may not be suitable for some readers.

Author Jeanette Winterson is facing some pretty harsh criticism lately, but not for anything she’s written. Rather, she’s under fire for something she ate.

Last Sunday, Winterson caught the pesky rabbit that had been eating her parsley at her home in rural England. She trapped and killed the rabbit humanely before reporting it to her some 33,000 Twitter followers.

Rabbit ate my parsley. I am eating the rabbit. pic.twitter.com/36rOpIxqxj

But some fans of the author—who wrote the award-winning Oranges Are Not the Only Fruit—were appalled by her butchering. One wrote:

@Wintersonworld #before i unfollow u,u make me sick. I will never again. read a word u write. Rest in peace little rabbit.

On the other hand, she seems to have won over a few followers, with some even praising her actions. @laraparson writes: “Keep it up Jeanette! Eat what you catch, catch what you eat. Much better that way than factory farmed.”

Winterson was quick to justify her decision to kill the rabbit, posting photos of her damaged garden and explaining that rabbits are pests in the British countryside and that there’s no carbon footprint when you kill an animal in your own back garden.

Here is my cat eating the rabbit innards. No waste no packaging no processing no food miles. pic.twitter.com/cByulPi8kN

When people told her the cat would have prefered Whiskers, she responded, “where do u think pet food comes from BTW?”

For better or worse, Winterson is experiencing a burst of international attention; she was even asked to speak about rabbits on British radio. Maybe she can recommend us a side?