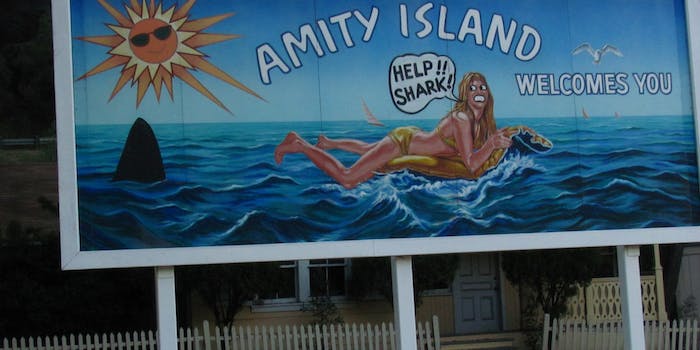 Could Back to the Future II’s vision of Jaws 19 become a reality?

Tumblr user ctrayn has a vision, and also an eerie addiction to sequels.

Back to the Future Part II famously envisioned life in 2015 as a year in which everyone had flying cars and skateboards that hovered. But while we’re not exactly Jetson-ing it up here in 2014, there’s one detail that could change everything:

So according to the movie Back to the Future Part II, by the year of our lord 2015 there are supposed to be 19 movies in the Jaws franchise.  As of January 2014, there are only 4. I personally see this as an enormous travesty, which is why I’m calling on the internet to rectify this grievous mistake.

To qualify as a feature film, the movie needs to be only 40 minutes long.

“So even if your film is 40 straight minutes of a rubber shark floating quietly in a bathtub,” ctrayn argues, “it still fulfills what I am asking of you in the challenge, and it is still probably a more entertaining watch than Jaws: the Revenge.”

Ctrayn’s not the first to think of what I’m now going to refer to as the Jawsadox. YouTube user eddache made a similar plea last year with a series of hilarious movie pitches.

Of course, there are some other pertinent questions that ctrayn didn’t get around to answering, namely: how will these movies find their way into wide release? Who’s going to make the actual Jaws 19 in 2015, so that the world doesn’t fall into a terrible time-space paradox? How are they going to make their shark into a hologram? And if the tagline for Jaws 19 is “This time it’s really really personal,” a riff on Jaws 4, then what does that make the 15 movies in between?

But despite these pressing questions, Tumblr has taken to the idea like a shark to water, giving ctrayn an outpouring of enthusiasm, and more than 35,000 notes in two days. Already promises to contribute and make films are pouring in. There are even a couple of offers on hand to write the scores.

So what if Tumblr delivers 15 identical movies of rubber sharks in a bathtub? Who cares? Does it have sharks in it? That’s all we need to know. We’re ready to lay down our money for Jaws 12: The Inflatable Terror of the Deep End right now.